The Ymir Lodge has evolved out of a life long passion for adventure. Owner Trevor Holsworth is a long time Kootenay resident and transplanted Aussie who’s made a career out of skiing. Trevor cut his teeth ski touring and climbing in the Rockies near Banff with climbing trips to distant mountains such as McKinley and others. He ultimately moved to the Kootenays to satisfy his craving for reliably good snow and skiing and while playing in and around Whitewater Ski Resort, Trevor discovered the bounty that lay just beyond it’s boundaries. As he was starting up one of Nelson’s first backcountry skiing stores, aptly named “Kootenay Experience”, Trevor began camping in, traversing across and skiing all over what would ultimately become his business’s home for the next 17 years (and counting). It didn’t take long before Trevor installed two yurts to provide shelter for himself and friends,… and ultimately powder hungry guests. A year later, not wanting to rest on his laurels Trevor started offering cat skiing adjacent to the Yurts, this operation was aptly called “Wild Horse Cat Skiing”. After 10 good years, the cat skiing business was winding down and with the yurts aging the plan was devised to create Ymir Lodge. The existing cat road infrastructure and knowledge of the land was used to haul all the necessary materials in to create the 7,000 square foot Ymir Lodge. 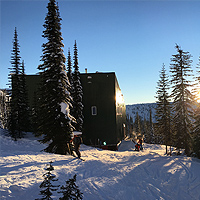 All smiles with Owner Trevor Holsworth on top of Kutetl Peak with the reverend looking on. 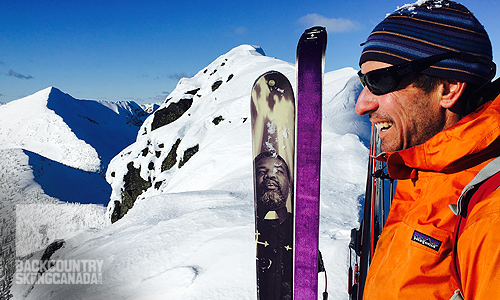 The lodge itself sits at a respectable 6,200’ on the west side of a saddle between South Seeman and Qua Peak. Alpine and safer tree skiing sits right out the front door and you can literally be plunging down a couloir within an hour of putting on your boots in the morning. This particular location is also home to the aging Yurtopia yurt which is now the sauna building. The lodge itself is in its fifth season has three spacious floors to accommodate 19 guests, plus staff. The main floor houses the dining area, cooking facilities, wood stove for heating, lounging area and of course requisite disco ball. The second floor has nine private rooms, each with two bunks while one room has four bunks. At the top of the stairs you’ll find three bathrooms which allow guests to answer the call of nature without having to go outside. Overall the lodge is rustic and homey with a comforting charm about it, there is oodles of space to relax, share stories of the day or practice your guitar skills. 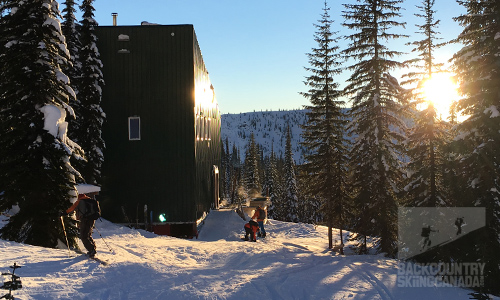 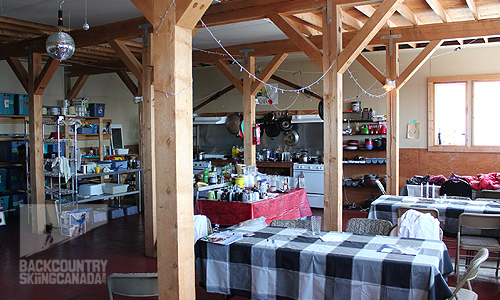 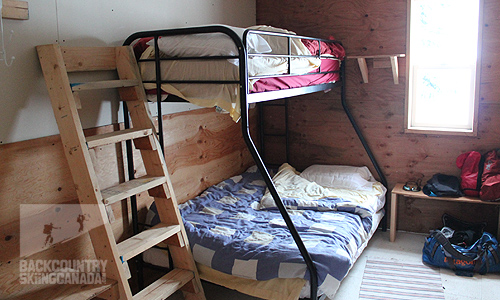 Situated on the door step of Whitewater Ski Resort, Ymir Lodge’s terrain encompasses five square kilometres with enough variety to put a smile on both beginner and expert skiers and riders faces. With big bowls, high alpine, treed runs, chutes and couloirs there’s a variety of terrain and aspects to keep multiple weeks of guests content. With an average snowfall of ten metres it’s never long between storm cycles and with 1,000’ of both alpine and treeline skiing you can find some long kootenay descents with short approaches. There are literally no flats in Ymir Lodge’s terrain, everything is either up or down, so runs are quick to access and  it’s ideal for knuckle draggers (I mean snow boarders) as well. With so much skiable terrain and a multitude of drainages it’s easy to link a variety of aspects and bowls into one long day loop. The terrain’s quality is easily one of the high points of Ymir Lodge. 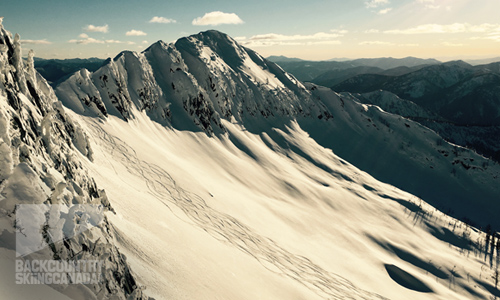 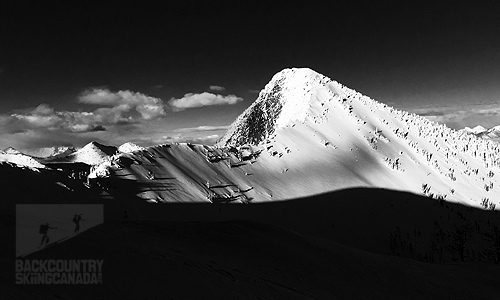 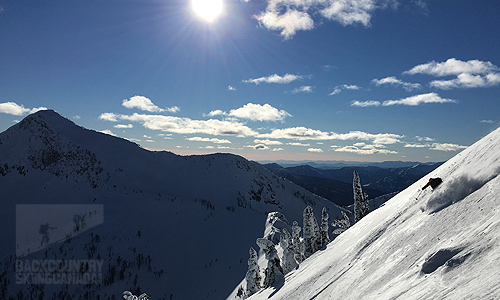 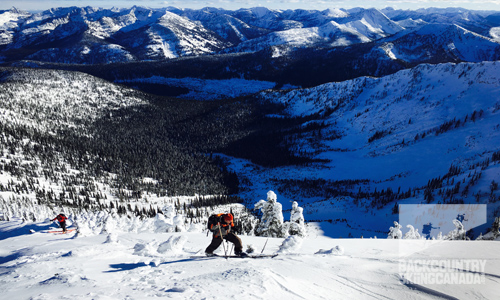 Here's an overview of the terrain, click the image for a larger view: 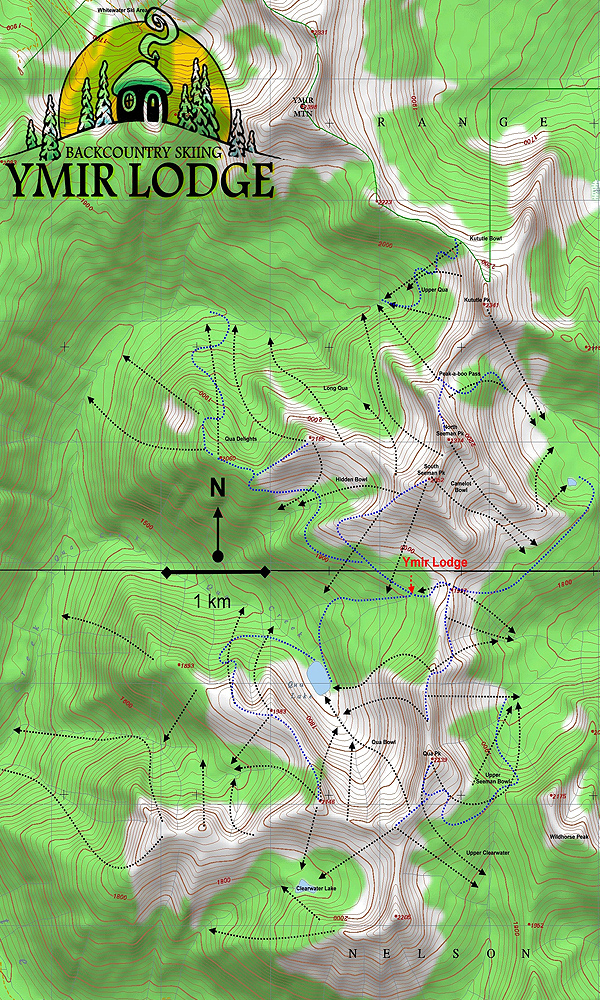 The weather prior to my departure had not provided the typical Kootenay pow that I was hoping for, however, even though it had been ten days since the last refresh, Trevor assured myself and the other guests that there was good snow to be found. After a quick heli in from the Nelson airport and ferrying in of the remaining guests from Hall Siding (a quick 5 minute transfer away), everyone geared up—eager to explore the peaks surrounding the Lodge. A group of three of us headed up South Seeman Peak to get a birds eye view of the surrounding terrain. After soaking it all in we decided to ski into Camelot bowl and then traverse south/west over a pass back to the lodge. Since day one is only a half day we took it easy and stayed relatively close to the lodge.

After the first day’s reconnaissance, Trevor agreed to show a large group of us the northern part of his tenure on day two. We headed back up South Seeman and accessed Long Qua via the saddle with North Seeman Peak. From here we traversed around to Upper Qua and headed East via Peak-a-boo Pass. While the Western aspects were holding snow well, East faces were wind scoured and slabby. We returned to the lodge in a similar fashion as we did on day one with good pow turns under our skis and a respectable 9km / 5,000 vert day.

Eager to explore farther, a smaller group of just four ventured out in much the same direction as the day before only with a few chute shots thrown in to save time accessing the northern end of the tenure. This time instead of heading back to the lodge via Peak-a-boo Pass we skinned up the ridge and into Kutetl Bowl with the majestic Ymir Peak as the backdrop. Our objective on this day was Kutetl Peak (commonly referred to as Qua Peak by local Whitewater skiers). After traversing around to Kutetl’s southern summit via the East ridge we got to enjoy a 1,200 foot shot of incredible fall line skiing while basking in the warmth of the sun. Looking back at our tracks on the canvas which was Kutetl Peak, I have to say that this was the highlight of the trip for me.

With 6,000’ of vert the day before, day four was meant to be more relaxed however the snow dictated otherwise. After heading up the ridge directly behind the lodge on the way to the summit of Qua Peak, we dropped in on a long dreamy 1,000 descent to valley bottom that put us in an ideal position to get into the Upper Clearwater drainage and gain access to Qua’s southerly peak along with Wildhourse Peak. Both offered up hero snow and heli terrain turns which made it hard to take head of the fading light and head back the way we’d came to the warmth of the lodge. With 11km / 6,000’ vert under our skis we’d had enough and decided tomorrow would be the mellow day.

Day Five brought our first day with out blue bird skies so we decided to stay a little closer to the lodge and ski Qua Bowl to the immediate South. While it took us some time, we ultimately found a prime 1,000 foot shoulder that offered up wind protected top-of-the-boot pow skiing. Since it was our last day we decided to farm this one and by the time the light was fading we’d again logged another six grand day.

Tired from the week that was and with limited time on fly day, we decided to make out last run of the trip down the South West face of South Seeman Peak but realizing there was still time before the heli arrived we did one final lap down the West face of a sub-peak off Qua and found yet more incredible snow, even after a 10 day drought.

Find all of the routes we took over the course of the week below on Backcountry Skiing Canada’s Movescount.com page, or click here for Day One, Day Two, Day Three, Day Four and Day Five.

Bottom line, if you are looking for a down to earth, rustic lodge experience then this is the place for you. Ymir Lodge caters to those not looking for a five-star experience, as Trevor put it, his guests say “don’t wine and dine me just take me powder skiing”. Thanks to Trevor’s Ethos to keep prices low and offer up good value I am sure this Kootenay gem will not be a secret much longer.

Book your adventure online at www.backcountryskilodge.ca Here you can see how many beds are available and pay via paypal . If you have questions, just e-mail Trevor as he does not have cell coverage at the lodge.