The Volkl Nunataq Skis get the “Gear of the Year” nod from the Backcountry Skiing Canada testing team for the 2011/2012 season. The Volkl Nunataq Skis are a winner due to their ability to please on and off piste and make the ski of choice a no brainer regardless of conditions. A tip of the hat to Volkl. 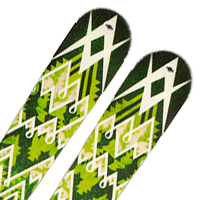 The elusive 'one quiver ski' is the quest of most backcountry skiers. One that is light enough to keep you fast on the skin track, responsive enough on the down, fat enough to ski deep POW and still powerful enough to tame the crud and chop. The Volkl Nunataq is the widest offering in Volkl's backcountry touring line up this season and it has many of the properties of the aforementioned 'one quiver ski'. With a low profile and full rocker combined with a 139mm shovel, 107mm under foot and 123mm at the tail you can see why Volkl classifies this ski as "Tour Freeride". With all this girth you would think the Nunataq would tip the scales at 10lbs or more but thanks to the Poplar/Beech wood core construction it weighs in at a respectable 7.5lbs / 3560g for the pair. While not the lightest ski around it's not far off the mark of many dedicated light touring skis and the Nunataq provides much more versatility for the 'weight to ski fun' ratio. Volkl modelled the Nunataq after the popular Gotama skis but thankfully have found a way to shave off some weight to make it light enough for the skin track. How did they do it? They trimmed the weight by using a wood core in what they call a "tough box construction" which incorporates multiple air channels and hence less wood and weight. 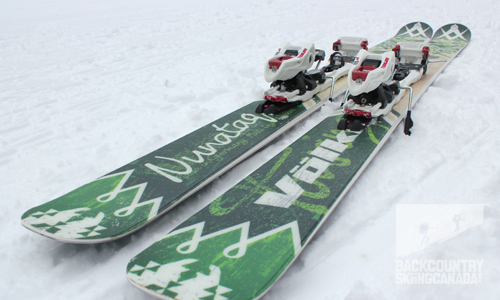 Nunataq is a an Inuit name meaning "an exposed, often rocky element of a ridge, mountain, or peak not covered with ice or snow within an ice field or glacier". Perhaps this is referring to the low profile rocker which keeps the ski from submarining and above the snow no matter what form it is in? With rocker my next question is always "what about the tip chatter?" thankfully it is almost non existent. In our testing, which encountered all conditions, the Volkl Nunataq performed incredibly well and had good turn initiation in any condition. It allowed me to crank out turns on the groomers (surprisingly well for such a fat ski) and rip a fast cruisey turn in deep powder with surprising stability. Perhaps this is why the Volkl Nunataq was the editors choice for Backcountry Magazine for 2012. 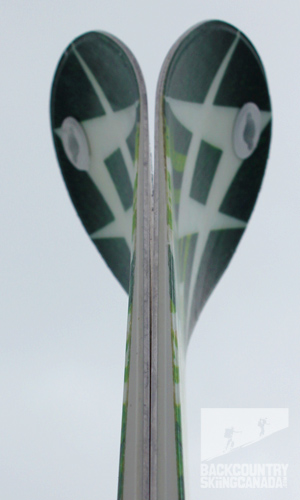 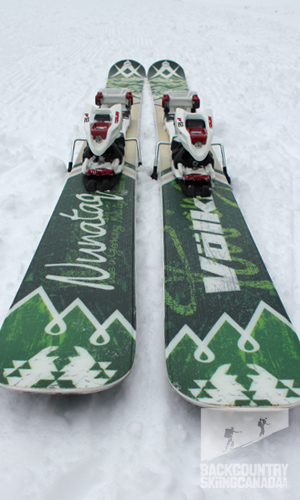 Volkl has incorporated their 'Skin Pin System' in every ski in the touring line up. This system uses mohair/nylon skins from Colltex which are pre-cut and ready to roll. There is a hole in the ski tip which accepts the skins 'pin' and you give the skin a 90 degree turn and it is locked in place. A slick system to secure skins to the ski but this would inhibit elegant skin removal with skis on, a technique that many backcountry skiers employ these days. (At the time of this writing Volkl was sold out of their pre-cut ski pin skins but we hope to get our hands on a set soon to review for you - so stay tuned.) 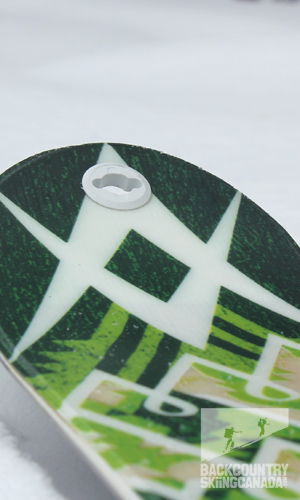 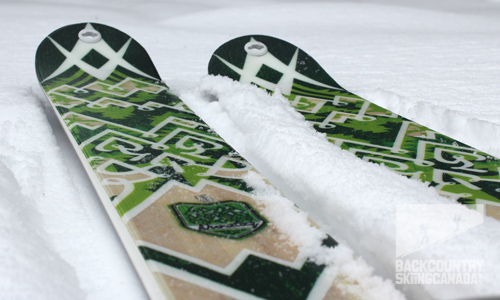 The Volkl Nunataq is a ski that seems to do it all, crud, chop, groomers and of course POW. This is a really fun ski that you can take anywhere and know that it will handle what you throw at it. While not the lightest backcountry ski out there it sure has a lot to offer and for me that is worth the marginal weight difference. I have put in a few months now on the Nunataq and have not found a day where I was disappointed in how it performed, it is ultra stable, forgiving and has a great flex - not too soft and not too stiff.

Although we could not test the Skin Pin system at this time the ski tip holes would provide the ability to build a toboggan in the event of an emergency, which is nice. Equally nice is the flat tail which allows you to plunge the ski into the snow on steep boot packs.

Did I mention that I dig the graphics on the Nunataq? The whole Touring line up for that matter. A nice understated, wholesome enviro feel to the top sheet that is interesting to ponder while putting the final thousand feet on that up track. Not that the graphics make it ski any better, but they do say the cloths make the man so maybe the graphics make the ski? It can't hurt, thats for sure. 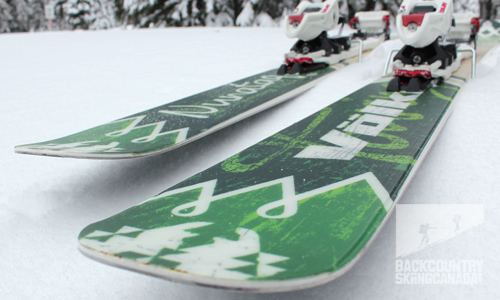 A one quiver ski for all conditions that is light enough for ski touring and stable enough to rip some groomers should you so choose. The 'Skin Pin' system can be used to construct an emergency toboggan with some other essentials. Beautiful ski to ride and look at.

No Volkl/Colltex skins with the skin pin system to give feedback on (yet). The top sheet is not as durable as we would like and chips easily around the edges.

UPDATE APRIL 2013:
The Volkl Nunataq skis won our "Gear of the Year Award" last season so you may have already guessed that I think these skis are something else. With two season on them my enthusiasm has not waned, they continue to provide a a fun ski experience no matter what the snow conditions. I mounted the Nunataqs with the Marker F12 At Bindings and together this is the ideal resort and backcountry set up. Take the skis out for a test drive if you get the opportunity, you will be glad you did.