Salomon’s achievements in the alpine touring boot world have not gone unnoticed. They started off with the rather heavy and bulky Quest 120 MAX; weighing in at 4400g per pair. Next was the backcountry version with a similar moniker; the Quest Max 120 BC, which shaved their weight down to 3616g per pair. Last year the Salomon Quest Pro TR 110 boots debuted with a weight of 3526g per pair. New for this season, we have the Salomon MTN Explore Boot; which weighs in at a svelte 2920g per pair. You’ll notice a huge weight savings this year with the MTN Explore hitting the sub three-kilogram sweet spot, all without sacrificing a spec of their skiing prowess. 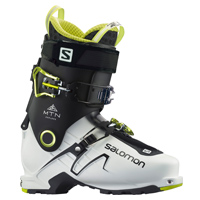 Up until now the MTN Explore Boots Salomon was taking baby steps towards a true AT boot; but this year they nailed it, and I think the majority of the credit goes to MTN Explore’s mastermind, Mr. Greg Hill. Fellow Canadian and long time Kootenay resident, Greg Hill is famous for his vertical adventure, namely the 2 million feet of ski touring he achieved in a single year (a record that is now being challenged, by the way). Greg knows a thing or two about ski touring, and it shows in the MTN Explore Boots. The weight is more than competitive with other AT boot brands, but the MTN Explore is not so light that the ski down suffers. As you’ll read in the verdict, I tested the MTN Explores not only in the backcountry on a light tech set up, but also driving a 112mm underfoot resort ski in any and all imaginable conditions. More on that later. 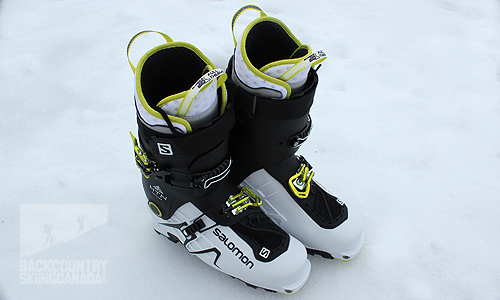 To keep the MTN Explore boots light yet powerful, Salomon made the shell from a lightweight Grilamid, the cuff from a flexible touring polypropylene, and kept shell walls as thin as possible. These two pieces are then joined together with an oversized pivot that provides a super stable connection, able to drive a wider ski without any unnecessary flex. This all combines to offer a flex rating of 110; which is neither soft nor super stiff. If incredible range of motion is your thing, then Salomon’s ‘Motion Flex technology’ provides 63 degrees of rotation; allowing you to boot pack like a king, or climb a skin track like an animal. A single flick of your hand opens not only the ski/walk mechanism but also the top buckle, thanks to some innovative design and ingenious thinking. Flick the ski/walk mode mechanism to the right, and you’re back in ski mode and engaging the carbon fibre spine; designed to transfer maximum energy to your skis.

On the exterior of the shell, non-switchable tech inserts allow for the use of tech bindings for the climb up and ski down. If you need to scramble a peak, then the grippy ‘Contagrip’ soles provide the traction you’ll want. The rockered sole makes walking on flat surfaces around the lodge, or the hike from the car to the trail head, easy on the joints.

A thermo-formable, ultralight CF 3D liner provides protection, warmth and comfort inside the MTN Explore boots. They have built-in laces for a secure fit, and a flex zone built into the liner around the ankle and Achilles, facilitating a smooth walking stride. 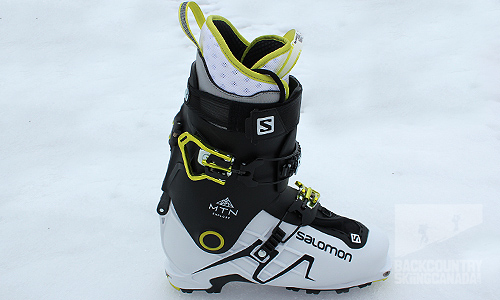 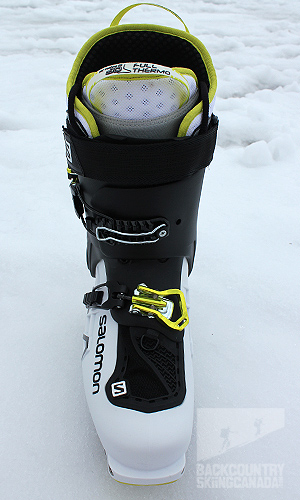 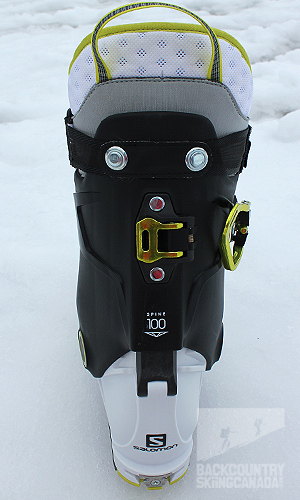 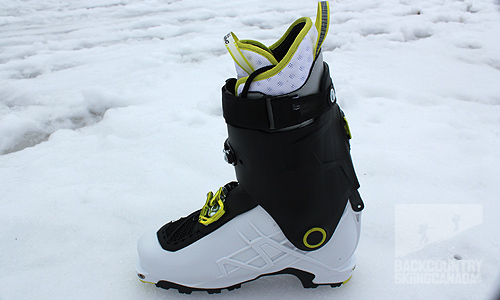 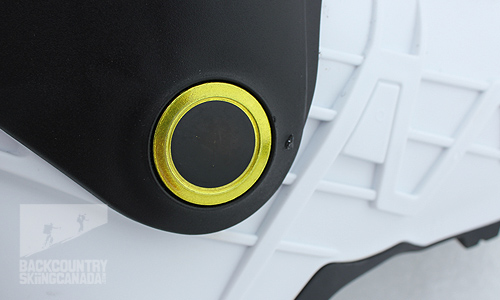 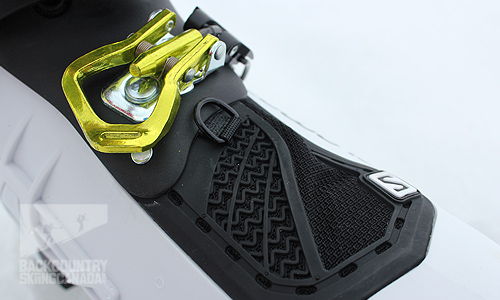 - Easy to use buckle with catch mechanism for tour mode. 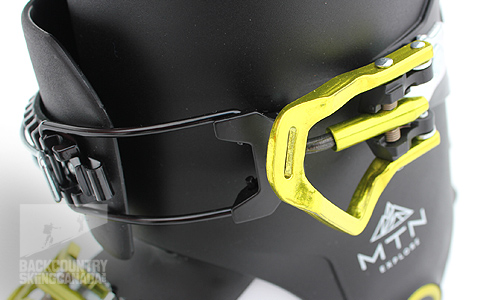 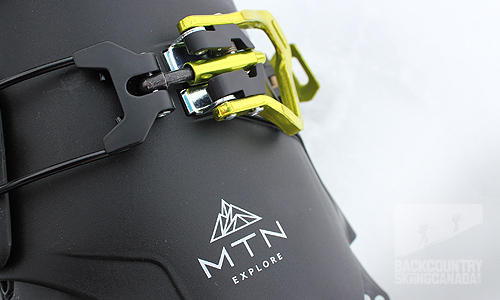 CustomFit 3D Full Thermo Liner
This ultralight liner is a pre-shaped 3D liner which is also fully thermo-formable. The built in biofit ventilation releases vapour from inside the liner while the stiff plastic tongue reinforcement ensures comfort and protection. 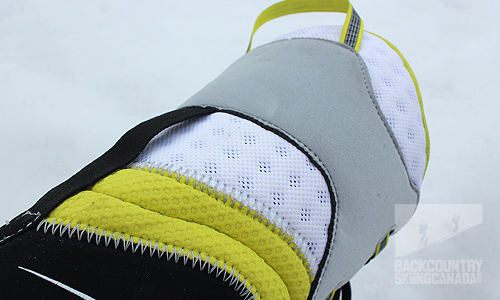 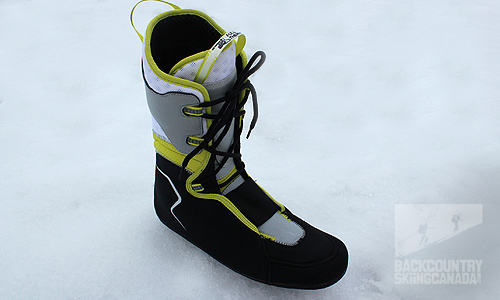 Sensifit Shell Technology
Sensifit Shell Technology uses an alpine pebax cuff which is lightweight and offers a progressive flex in a wider variety of temperatures. The EcoPaxx lower shell is made from 70% renewable materials and is 100% carbon neutral. Thinner sidewalls with strategic reinforcement bands make the MTN Explore boots lighter, while also providing a more secure foot wrap.

I have a few simple requirements for any successful alpine touring ski boot: I want them to be super light, but I also want them to ski like a much heavier boot; One that can drive a big ski in deep, challenging snow. Not some barely there, mere essence of a ski boot that will have me suffering with every turn on the way down, only ever making me smile on the up track. True, we do spend 90% of the time climbing, but that other 10% is so sweet, I’m not willing to give up any of the joy on the down for a quicker climb up the mountain.

With this in mind, I tested the Salomon MNN Explore Boots both in the Whitewater backcountry as well as at the resort. I wanted to be sure that this light-weight AT boot could still drive a big ski in technical terrain. At the resort, I used them with my 109 Volkl BMT’s touring, and also my heavier 112mm underfoot Volkl Vwerk Katana skis. I was so impressed with the MNT Explore’s ability to drive a big ski on groomers, in crud and variable conditions, that I really didn’t miss my resort boots. The MTN Explore Boots held my foot firm, provided support, and allowed for incredible energy transfer to the skis. This was not your average light weight AT boot; considering how well it actually skied as a resort boot.

On the Skin track in the backcountry there was no question that the MTN Explore would excel; given its light weight and ample cuff rotation. Not only did the MTN Explore feel comfortable and secure climbing, transitions were a snap; as I simply left the boot fully buckled and flipped the ski/walk mode lever. Even without unbuckling a single thing, the MTN Explore provided more than enough forward and back flex to climb the steepest of skin tracks. The innovative horizontal orientation of the walk mode lever took a few (thinking) tries before it became natural. But once it did it was simple and fluid to use. The idea behind the non-traditional orientation is this: the flipping of the walk mode lever is combined with the opening of the top buckle, saving you time on every transition, which means more time for skinning and skiing. 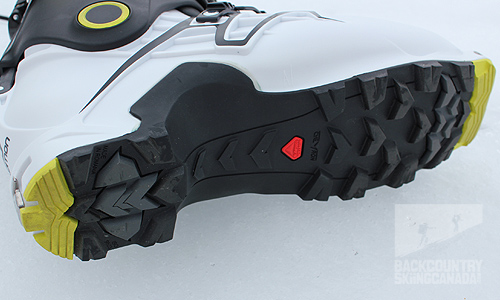 Surelock Mechanism
The Surelock walk/ski locking mechanism offers a metal on metal design that locks into the boots carbon spine to provide powerful rear support. You can easily activate and disengage the boots 63° range of movement with a single right to left hand swipe that can also open/close the top buckle at the same time, if needed. 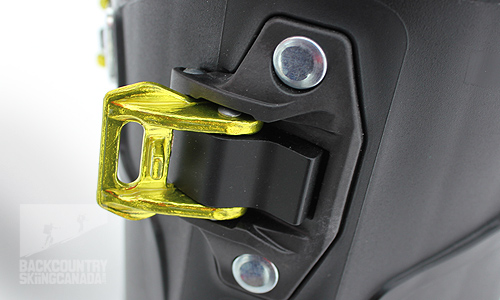