RAMP’s new Shabang Skis are classified as a directional twin tip ski with a rocker-camber profile. But I guarantee you ain’t seen nothin’ like these before!

The substantial 42cm early rise and super fat 140mm shovel allows it to plow though just about anything. The 90mm waist, 8.6 metre turn radius and camber underfoot make the ski nimble, and quick to respond to your commands on groomers or in tight trees. The overall dimensions are the same at 140/90/130mm for all three sizes: 169, 179 and 189cm. The 189cm length weighs in at almost 10 pounds. This ski has plenty of power behind it and is wonderfully shaped. 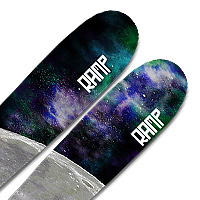 The Shabang is designed and manufactured in RAMP’s state of the art, environmentally friendly production facility in Park City, Utah. RAMP uses an FSC (Forest Steward Council) certified full bamboo core with a layer of kevlar sandwiched between layers of triaxial and biaxial glass, finishing with a nylon top sheet and 7500 sintered base. All of RAMP’s skis and snowboards are crafted with a patented vacuum-moulding process ensuring a strong, durable product with outstanding performance.

The overall design and manufacturing process of the Shabang Skis makes them an energetic, powerful and versatile ski in a multitude of conditions. They’re not unlike the RAMP KaPow Skis that we reviewed a few years ago, only the Shabangs have more of a 1950’s pin-up girl figure. Not exactly 24-36-24”, but pretty darn close.

Check out the shape of the Shabang—fat, narrow, fat! 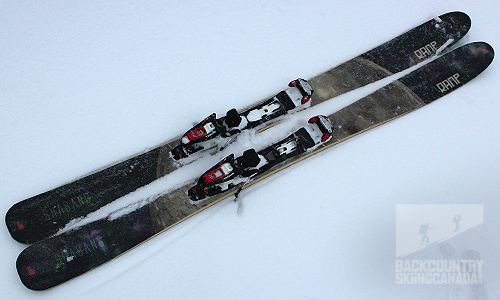 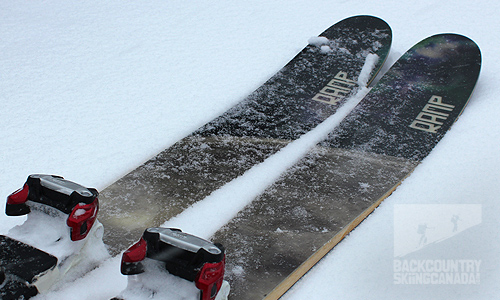 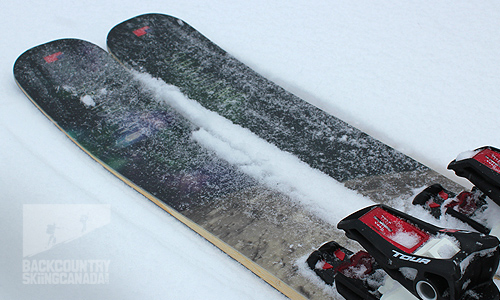 Plenty of camber underfoot to keep those turns snappy. 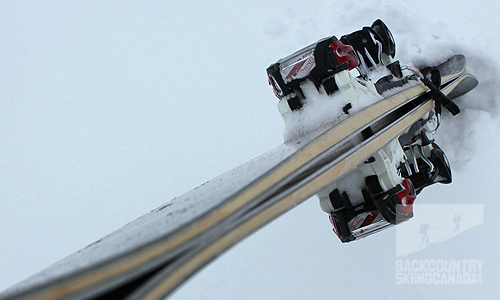 A closer look at the unique top sheet design and of course the bamboo core showing through to the sidewalls. 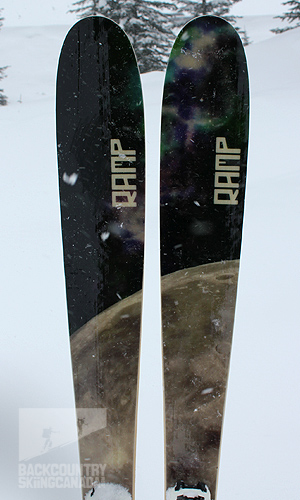 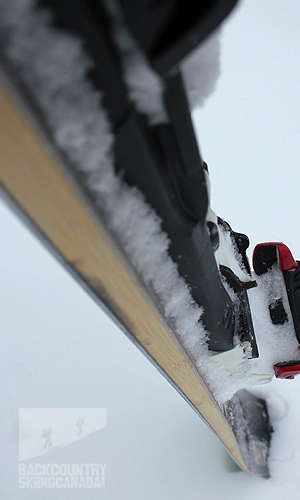 Can you say "maximum rocker" tip and tail? 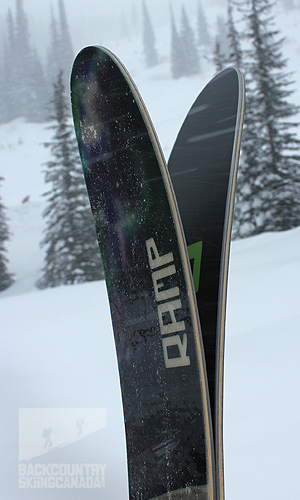 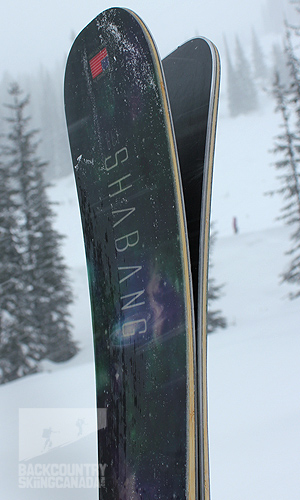 I’ve been shredding the local resort and backcountry pow for the last month with the 179cm length Shabang ski mounted with Marker F10 AT bindings (reviewed here). Being 6’1” and 175lbs, I’d would have preferred a 185cm ski (especially with this much rocker) but RAMP only manufactures 169, 179 and 189cm lengths, so I went a little shorter to facilitate tighter turns and cut down on weight underfoot.

I tested the Shabang skis on in-bound powder stashes and also spent a fair amount of time shredding groomers. They were also welcome companions on many backcountry sojourns over a number of early season, deep days. Where they performed best depends on your style of skiing really: Deep powder was child’s play on backcountry ski days but the skis were a little on the heavy side for lugging up the skin track. Being accustomed to touring with the Volkl BMT 109’s under foot (which weigh in at a full kilo less) the Shebangs took some getting used to. At the resort, however, they were plenty of fun on powder days, even after the snow was all sliced up into chop and soft mounds. The early rise 140mm tips can bust through any snow conditions with ease. On dryer days the groomers proved to be almost as much fun since the camber underfoot and aggressive radius allowed the RAMP Shabang’s to turn on a dime. It took me some time to get used to the super generous turn radius (at 8.59 meters there’s an incredible amount of side cut). This provides lots of pop out of turns, but less stability on long arcing carves due to lack of edge contact. Smearing a turn is no problem but edge grip can be a bit elusive. I also found there was a bit of a learning curve with the 130mm tail. I simply wasn’t used to such a fat tail completing the turns. However, with a slight stance adjustment I was able to get back over my skis and take charge once again.

Over all, this is one unique ski. Super fun to play around on at the resort and also competent enough to tackle the backcountry (although a little on the heavy side while going up).