The Ramp BigBambooski skis are the latest fat ski in Ramp’s line up, but not quite as fat or heavy as the Ramp KaPow Skis that we reviewed last season. While the KaPows were a pure powder ski the BigBambooskis are more of an all round powder ski with more versatility. Weighing in at 3991 grams (per pair) for 105mm underfoot isn’t going to shatter any records but it’s paltry when compared to the 4500 gram weight of the KaPows. Saving close to 600 grams while maintaining ample girth underfoot makes the BigBambooski well suited to both backcountry skiing and resort days in varying conditions. The twin tip design allows for a fun skiing style, tricks and park laps should you choose. With traditional camber underfoot and early rise tips the BigBambooskis float in deep snow but can also carve on groomers should the snow not fall in abundance. This makes the BigBambooski your one ski for any conditions. 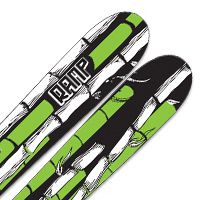 Before we dive in fully with the BigBambooski lets take a quick look at Ramp’s history and environmental stance first. It all started in 2009 when Mike Kilchenstien founded Ramp after a 32 year career with Rossignol. Mike figured that he could do things different and better so he started his own ski company. He decided to use a vacuum moulded ski manufacturing process along with Bamboo wood cores with razor side cut (more on this a little further down). In 2012 Ramp moved their production facilities from Asia to the USA in order to have stricter control over quality, materials and the entire manufacturing process. Ramp has built a solid commitment to the environment into their production process. All skis in the Ramp line-up use pine-based resins rather than the standard petrochemical versions. All skis are shipped in padded ski bags rather than boxes and once you are finished shredding your skis, Ramp will take them back and provide you with a $50 credit towards a new pair.

Black Diamond’s 3D construction keeps the Link Skis stiff while still being light. The secret is their use of pre-preg fibreglass and a Paulownia wood core. Top this off with a sidewall dampening system for reduced tip chatter on hard pack and icy snow and a stainless steel tail protector with a built in skin notch and you have a ski that is made for the backcountry which can also tame the terrain at the resort. 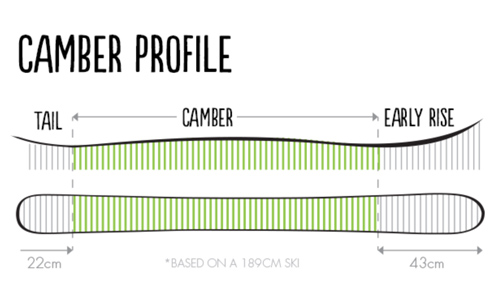 A creative moniker and top sheet graphics are just the beginning of the fun with the Ramp BigBambooskis. 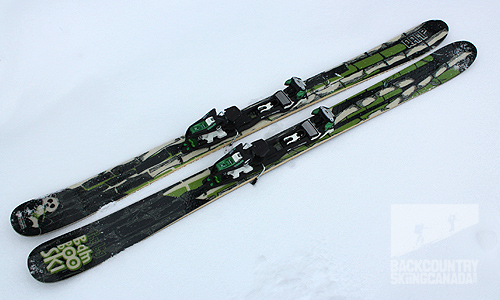 Thin profile on the tips and tails with early rise in the front and a twin tip in the back. 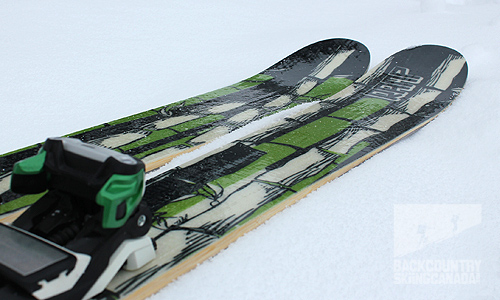 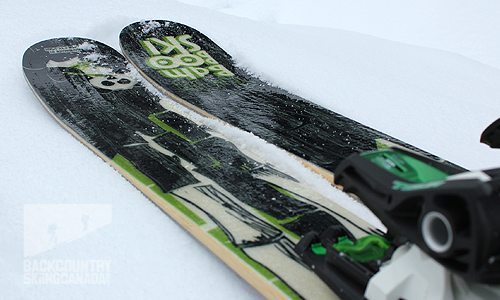 As you can see in the illustration below the Ramp BigBambooskis have multiple layers of various materials which make them durable, torsionally stiff, flexible and most importantly fun. The top sheet is made of Nylon followed by layers of Triaxial and Biaxial Glass then an environmentally sustainable FSC Bamboo Core. This is followed by another layer of Biaxial Glass then Kevlar and Triaxial Glass. Last, they have a 7500 Sintered Base with Steel Edges to finish things off. While the bamboo core provides a rock solid platform, the full Kevlar layer makes the Ramp BigBambooskis strong and good under tension, while still being reasonably light and providing ample vibration dampening. 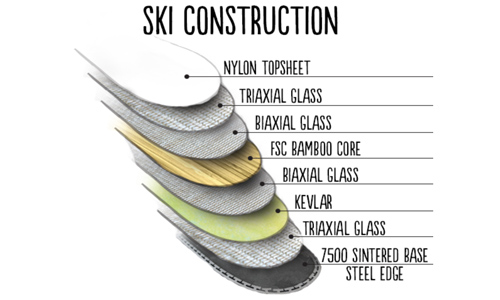 A bamboo core is not only sustainable but also looks good and performs well. 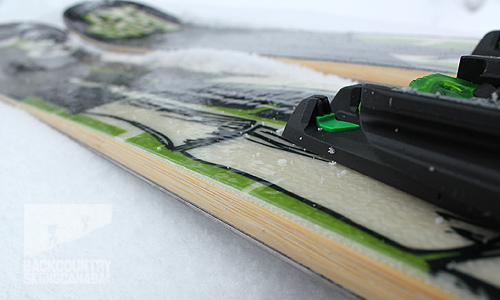 Razor Cut
Ramp use a new sidecut concept on the BigBambooski skis called “Razor Cut”. This shape is said to increase edge grip by straightening the side cut from the ski’s midpoint back (where you need it most) then curving again to the tail. This unique shape allows wider skis such as the BigBambooski to still carve on hard snow.

FSC Certified Bamboo Wood Core
Most skis today use a relatively inexpensive, light and durable wood core such as poplar. For the BigBambooskis, Ramp uses bamboo (obviously) which is three times as hard as poplar but also triple the cost. This Bamboo core is so hard that it provides similar properties to that of metal but without the problems that occur when metal flexes continually. Bamboo is also renewable and the Forestry Stewardship Certification that Ramp has received for their cores is very rare in the industry. Other companies may say that they use bamboo cores, but they are typically bamboo strips mixed with poplar or simply a bamboo veneer.

Vacuum Moulding
Most ski companies use industrial presses to manufacture skis, applying up to 4 atmospheres of pressure to force the ski’s layers against camber plates. This is said to result in an unnatural shape along the length of the ski. In order to avoid this Ramp uses a vacuum-moulding process which was perfected in the aerospace industry. A vacuum bag with 1 atmosphere of pressure is used to distribute forces evenly allowing the ski’s layers and materials to retain their natural shape, thus creating a bigger sweet spot.

Camber underfoot with early rise in the tip and tail. 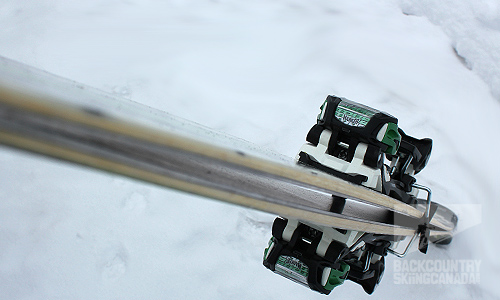 Plenty of early rise in the tips to float in deep snow. 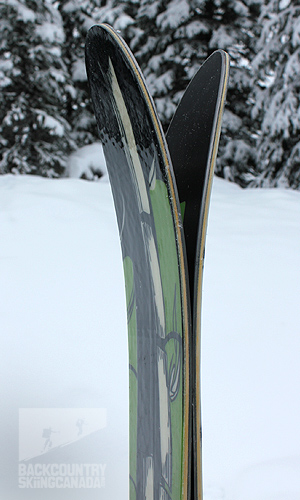 The BigBambooski is a twin tip ski which opens the door to a fun, trick style of skiing. 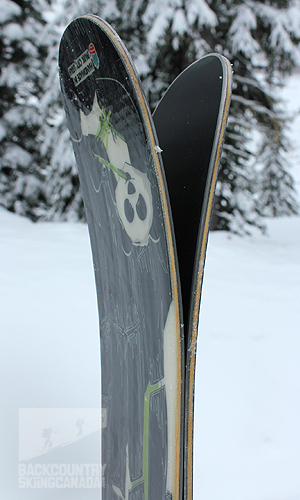 What I liked best about the Ramp BigBambooski skis was their versatility. With traditional camber under foot and early rise in the tips they were fun in deep snow while still being fairly stable in harder conditions. At 105mm underfoot they are not considered a dedicated powder ski but they sure performed well ski touring all over the Selkirk Mountains this season (where most of the powder days were on the coastal side of things). Given their girth the BigBamooskis were still relatively easy to put on edge and fun to ski in variable terrain. I knew I had a ski fatter than 100mm underfoot as they provided a very stable platform from which to charge. Given that they weighed only 3991 grams the BigBambooskis were responsive and energetic.

I expected the tips to chatter in crud and on frozen groomers given the thin profile and early rise, however I was happy to be disappointed. In these conditions I did find that the BigBambooskis got pushed around a little since they were not as heavy as other skis I have reviewed. Also, the rounded early rise tails didn’t quite finish my turns as complete as I would have liked, however this did allow for a more loose and fun style on soft snow days. When things firmed up and iced over the Ramp BigBambooski didn’t have the best edge hold as the effective edge is limited by the early rise tip and tail.

Overall the Ramp BigBambooski was fun to ski and ideally shaped for the variable conditions that you’ll encounter inbounds and out. It may not be a true ‘quiver of one’ ski but should you live where copious amounts of snow fall and want a ski light enough to ski tour with then you should definitely consider the BigBambooski.

Be sure to read our previous reviews of the Ramp Peace Pipe skis, the Ramp Groundhog and Beaver skis and of course the super-fat, super-fun KaPow skis.