The Polar Ignite is a fitness and cross-training watch with integrated GPS and is touted as your next-generation workout partner. It’s ideal for a long list of activities including backcountry skiing as it will help you monitor your biometrics in real-time, as well as compare results to previous days. The Polar Ignite is the second watch from Polar we have reviewed and is a slimmed-down version of the Vantage M but with a few new bells and whistles. If you didn’t get a chance to check that review out, you can do so here. 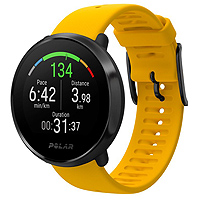 Image caption for image or video below this text. 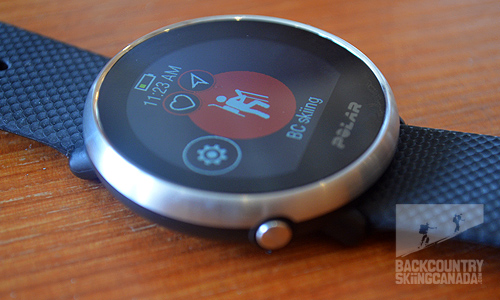 The two watches share quite a number of features, many of which are covered in detail in the Vantage M review. Such features include the heart rate monitor, the Polar Flow app, Sport Profiles, activity tracking, GPS, and more. For this review I’ll focus more on what’s new and different in the Ignite, so if you want to learn more about some of those other features, be sure to check out the Vantage M review.

The body of the watch is made of a reinforced polymer and features a stainless steel bezel with a single stainless steel button. The display is a gesture-activated colour touch display (IPS TFT) with ambient light sensor, 240 x 204 resolution and a Dragontrail glass lens.

The Ignite is physically smaller and weighs 10g less than the Vantage M, coming in at 35g compared to 45g. This shedding of bulk comes with obvious benefits, but of course, there are disadvantages as well. Perhaps the most noticeable difference is that the battery life is nearly halved, and a few Bluetooth Smart Features are unavailable. The Ignite is, however, water-resistant to 30m and has a ISO 22810 rating, which means it’s suitable for swimming.

The watch straps are 14g and feature stainless steel buckles. Available in a variety of colours, the straps vary in material; TPU plastic for black and silver, silicone for other colours. The small size band fits wrists with a circumference os 130-185mm, while the large fits 155-210mm.  If you prefer to use a different strap, the Ignite is compatible with third party 20mm watch straps. 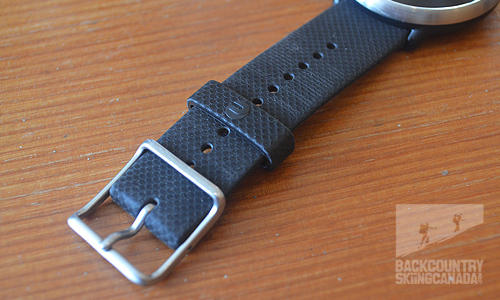 The battery used is a 165mAh Li-pol lasts up to 17 hours when in training mode, or 5 days in watch mode with heart rate tracking. 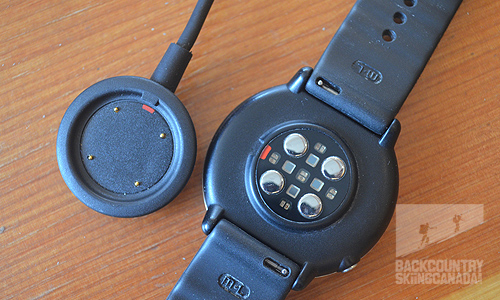 The Ignite uses the Polar Flow application to pick up some of the functionality, and a few of the features found on the Vantage M can be accessed on the Ignite through the Polar Flow App. Some such features include Training Load Pro and Training Benefit. The watch can be set up and used without any connection to another device (Standalone mode) but for full features, functionalities, and unlimited cloud storage, the free Polar Flow app must be used. 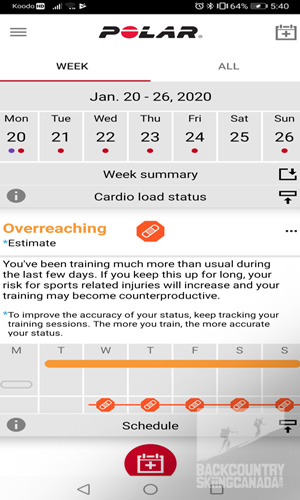 The Ignite offers a number of profiles to choose from that calculate and\ measured metrics in different ways to offer statistics best suited to the sport. For example, 40 minutes of yoga generally burns less calories than a 40 minute run, so the individual sport profiles take that into account. 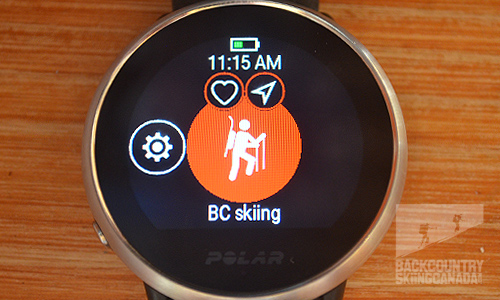 You can select which activities you would like on your watch in the Polar Flow app. 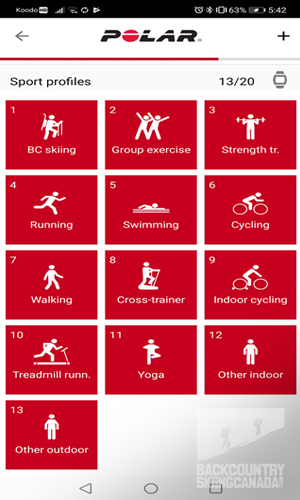 After a workout, you can review stats on your heart rate and calorie burning. You’re also able to scroll through previously recorded workouts.

The integrated GPS is ultimately for the runners, walkers, cyclists, and outdoor enthusiasts since the built-in GPS can track your speed, distance, route, and elevation. These statistics are then offered with such details as maximums, minimums, and averages. 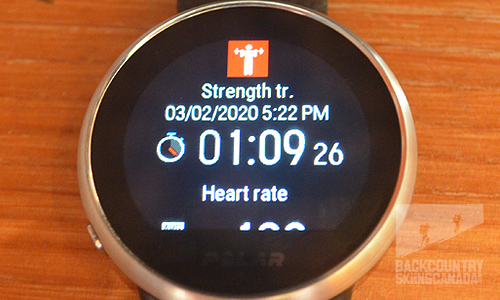 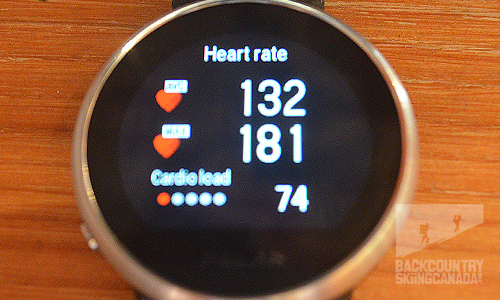 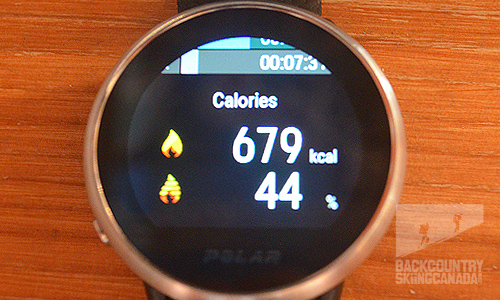 Using the Polar Flow app, you can review the results on your phone which have bigger screens and provides an easier layout to view, as you can see below. 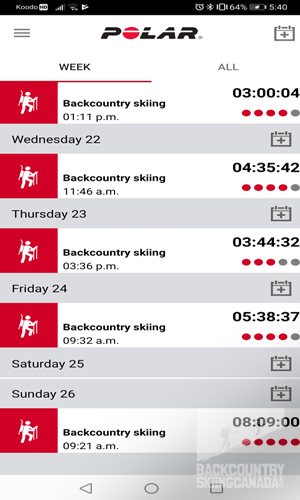 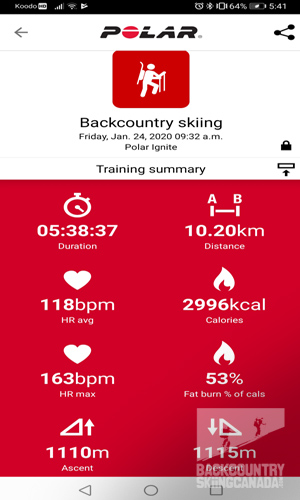 A new feature to Ignite is the Serene™ Breathing Exercise. The is a guided breathing exercise that helps to relax the body and mind, manage stress, and improve the quality of your sleep. This deep breathing exercise offers an animation and vibration feedback in order to guide you into a slow, consistent breathing rhythm. The sessions can be modified in order to suit your needs, allowing you to customize both the breathing rate and length of each session. After the session is complete, a summary of the time is given. Your summary includes time spent in the three serenity zones, which are based on the number of breaths per minute. 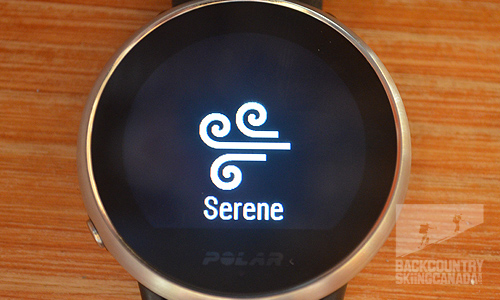 The Serene exercise encourages slow diaphragmatic breathing, with the ideal rate being six breaths per minute. Studies have shown that deep breathing helps to synchronize the heart beat to breathing, and that when this is achieved and repeated daily, many benefits can be linked to the exercise including improvements in mood, resilience to stress, emotional regulation, sleep, and cardiovascular health. 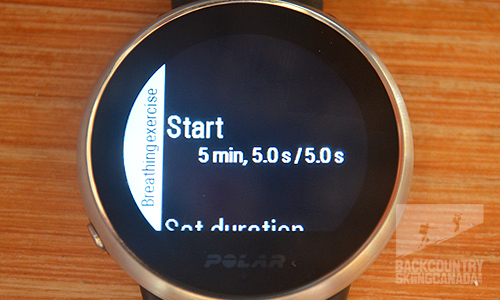 Sleep Plus Stages is another feature available on the Ignite, which is also available on the Vantage M but was not covered in detail, so I’ll dive in a bit here. This feature tracks your metrics throughout your sleep and produces a breakdown of the sleep stages and the amount of time spent in each. The algorithm used for Sleep Plus Stages has been validated against the current gold standard in sleep tracking, polysomnology, and has been deemed to determine sleep stages with reasonable accuracy; not bad for a watch! It automatically senses when you fall asleep and wake up, and offers a detailed breakdown of your sleep in the Polar Flow app. 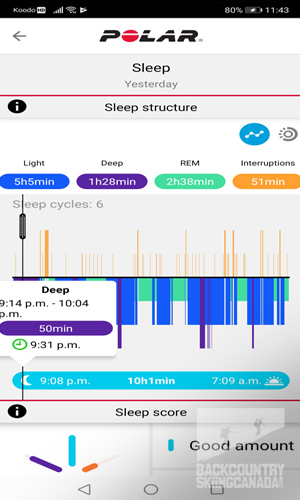 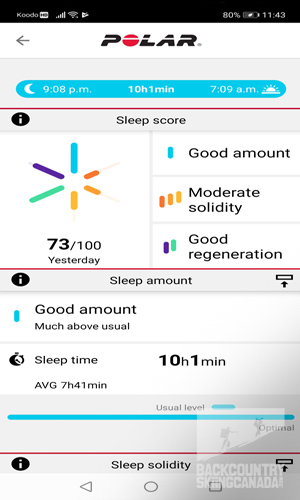 The Nightly Recharge is another feature available to both watches but is not touched on in the Vantage M review. This feature measures how well you recover overnight and is based off two components: how well you slept, and how much your autonomic nervous system calmed down during the first hours of your sleep. These components are compared with data from the previous 28 days and offer insight as to how well you have recovered. 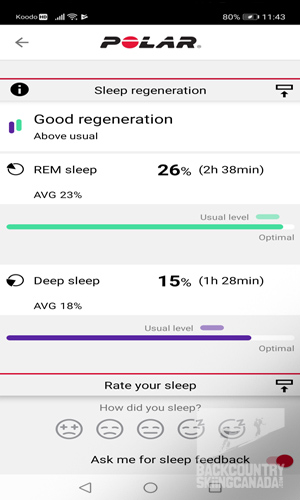 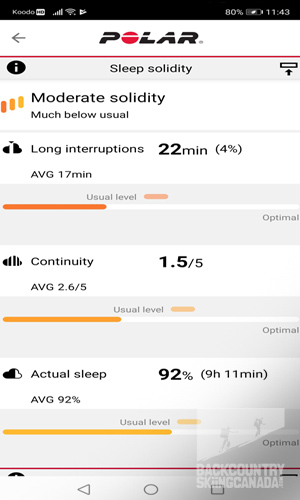 Fitspark is a new feature that really makes this watch stand out from other fitness watches. Fitspark is a training guide that uses your training history in combination with data from Nightly Recharge to create a daily workout that matches where you’re at each day. Fitspark workouts are based on weekly physical activity recommendations for adults from the World Health Organization. Such recommendations include 150 minutes of moderate, or 75 minutes of vigorous cardio, and two sessions of resistance training. Fitspark offers 2-4 workout options each day, one that is the ideal workout based on metrics collected, and 1-3 other options if you are feeling something different.

The Ignite has a couple timer features which include ‘Stopwatch’, Interval, and ‘Countdown’. Features like automatic laps (manual laps is not available), custom heart rate zones, and quite a number of others interact with more of the senses by using audio and vibrational queues to enhance the user experience. 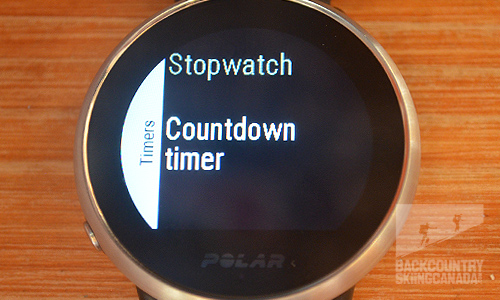 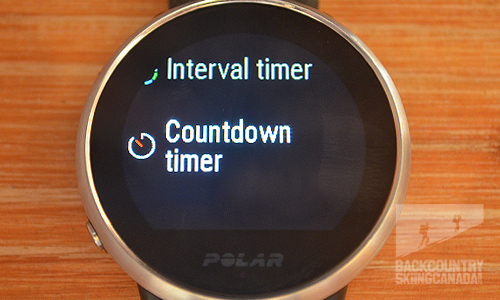 While the above features are the highlights, the Ignite offers a ridiculous amount of features and functionality. Some other features include Smart Calories, Fitness Test, Activity Guide, Running Index, Running Program, Training Benefit, Training Load Pro, and the list goes on…

Beyond the unique features, the Ignite is able to connect with a number of other sports apps including Strava, TrainingPeaks, MyFitnessPal, Endomondo, and Nike+ Run Club. You can also share training data with your personal trainer using the Polar Flow app.  Polar club synching allows you to share highlights, join groups, and interact with the Polar Flow community.

There is a lot to like about the Polar Ignite, but there are also a few things that missed the mark. On the whole, I think it’s a pretty great watch with some addicting functionality.

At first, I found the look and feel of the watch a little underwhelming, but after a time it definitely grew on me. Compared to other sports watches I’ve tried, this one certainly feels a little… less. If simplicity is your thing, this could be a bonus for you. I found the display to be a bit boring and there is no option to customize it or adjust the screen brightness.

The touch screen was a little frustrating to use at times, often if my hands were cold or wet. Seeing as pretty much all the functionality comes from the touch screen, this is a bit of a disadvantage.

The watch strap is not uncomfortable, but it traps moisture if you start to sweat; the plus side is the Ignite is compatible with third party strap options.

I thought it was pretty clever to use the app for so much of the functionality of the watch. Allowing our phones and computers to do the work means the watch can be physically smaller and simpler. It’s also nice to navigate the Polar Flow app on a bigger screen, instead of trying to do everything on a small touch screen with only one button.

This shedding of bulk comes with obvious benefits, but of course there are disadvantages as well. Perhaps the most noticeable difference is the battery life is nearly halved, and a few Bluetooth Smart Features are unavailable in this model.

One thing I have mixed feelings about is the need for manual sync with the phone. On the one hand, I can understand that this increases battery life by not having the two devices communicate continuously via Bluetooth. On the other hand, I found it slightly tedious. It often took a couple of attempts to sync the two devices, despite them being right beside each other, and in order for the devices to sync completely, a wifi connection seems to be required. The watch offers limited functionality solo so anytime you want to use any advanced functionality, manual sync is required.

I love that this watch has an aeroplane mode. The watch I currently use has no option to limit communication to other devices and I find it actively interferes with transceivers in search mode, so the opportunity to turn on aeroplane mode on the Ignite is a big advantage in my books.

I really enjoyed using the many features included in the Ignite. Using features like Nightly Recharge with Sleep Plus Stages, and fitness test allow you to keep in touch with your body in a new way. The friendly reminders from  Fitspark were nice not only as motivation to move, but to engage in a variety of activities so that you get a bit more balance. I also really enjoyed being able to see maximum, minimum, and average stats after a workout.

One thing that seemed to occur more often after prolonged use was that the watch would miss data. The watch strap needs to be done up extremely tight in order for the functions to work, and I would still occasionally wake up to find the watch had not recorded and the watch suggesting that I had not done it up tightly enough (despite having it very, very tight). This occurred less often with training sessions, but the tightness required for accurate and reliable measurement is pretty excessive.

All in all, this is a pretty cool device. I think there is room for improvement, but it is a solid platform on which to grown and I certainly have fun using it.