The Marmot Bolt Ultralight 3 person tent is a freestanding ultra-light shelter ideally suited for your next adventure in the mountains or car camping road trip. At barely over a pound per person, this 3 person tent is roomy and has a few key features that make the living space super enjoyable. 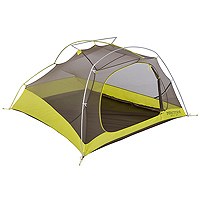 Ready for anything, the Marmot Bolt UL 3P Tent is shown below with the fly secured and the entrance zipped. 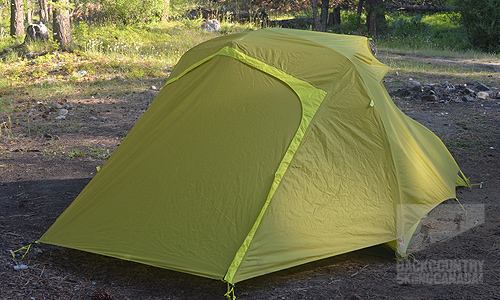 The Bolt UL 3P Tent uses Zone Pre-Bend Construction which optimizes interior volume by creating near-vertical walls. This not only creates more head room, but makes the space around the corners of the tent more available for use by not having them sag inwards thanks to strategically placed volumizing clips.

DAC Featherlite NSL Poles offer best in class weight as well as simplicity of use.  Marmot has colour coded all the clips and poles in order to make set-up more intuitive. 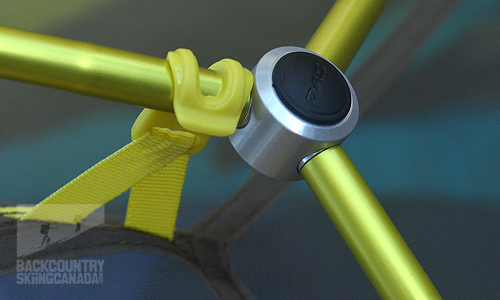 The canopy of the tent body is entirely black mesh to optimize star gazing on clear nights and features a single ‘D’ shaped door with dual zippers. Two large pockets are located on the sidewalls near the Bolt UL's door. 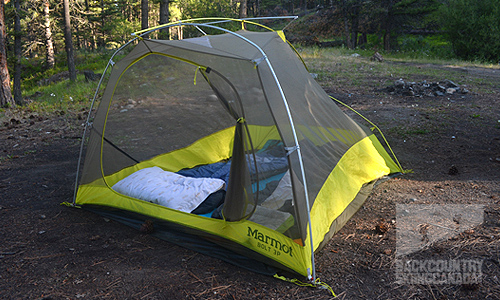 Loop and toggle door holders allow you to keep the door out of the way, and a 'lamp shade pocket' on the ceiling holds your headlamp or flashlight and distributes a nice even light throughout the tent. 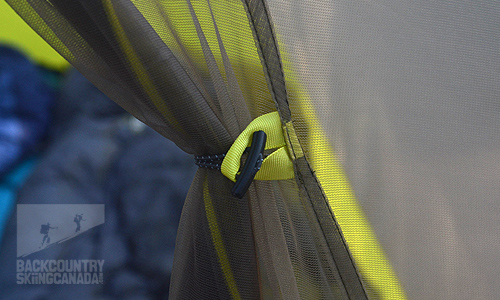 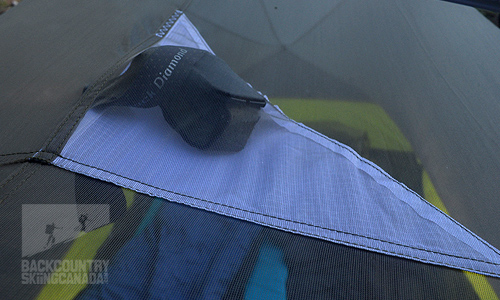 The seam-taped catenary cut floor keeps the sides of the tent tucked in and under the shelter of the fly. Wait… catenary? Don’t worry, I looked this up for us. In simple terms, it means it’s curved. Imagine a chain hanging between two posts; now make those posts the tent corners with the cut of the floor “hanging” in towards the centre of the tent. The result is a rectangle whose sides are bowed inwards so that the corners are the outermost point in all directions. It’s a simple design solution to help keep you dry. All of the corners are also reinforced for increased durability. 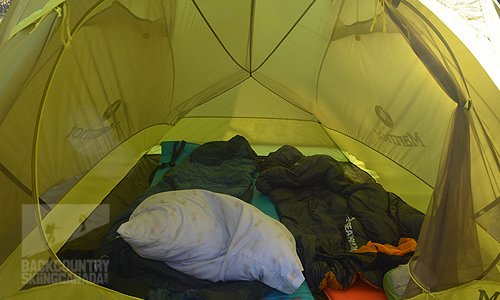 The Rain-Shield Polyester Flysheet is made with 20D 100% polyester RipStop Sil/PU. This full-coverage fly attaches to the poles not only at the pole tips via specialized clips, but also at midpoints along the poles with hook-and-loop straps. This design won’t stretch or sag when wet, and the fly material is resistant to UV damage. 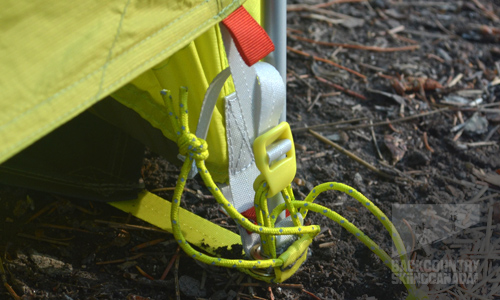 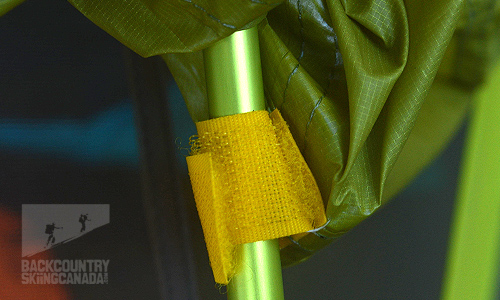 At the door end of the tent, the fly extends down and creates a vestibule space for gear storage. 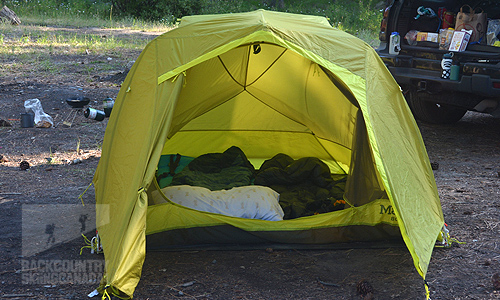 On both sidewalls, the fly feature ventilation near the top which can be opened or closed based on preference. 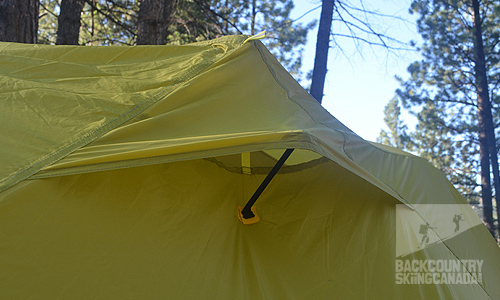 All the zipper pulls on both the rain-fly and tent body are nylon in order to eliminate noisy jingling on windy nights. 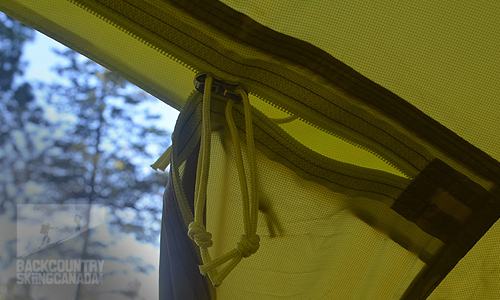 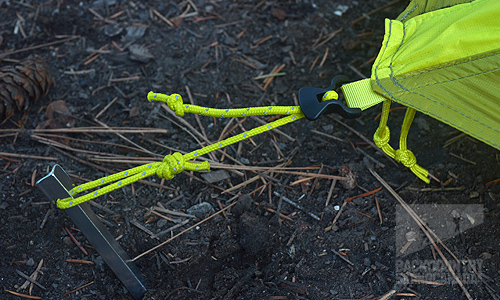 The tent comes with guy-lines, colour matched patches, and just enough pegs to keep the fly on. A footprint for the tent is sold separately.

One feature I found a little odd was the free-floating crossbar. It didn’t seem to be an issue in terms of performance, but took away from an intuitive setup, and is sort of a questionable design feature. After a couple of times, the set-up went smoothly, but there was a little bit of a learning curve with this one. ​​​​​​ 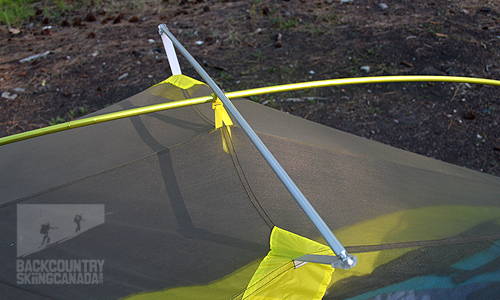 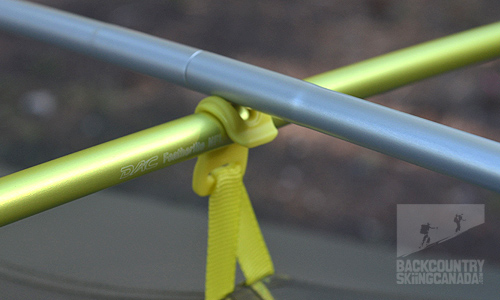 The most notable feature of the Bolt UL 3P is it’s packed size and weight. At just over 3 pounds, I wouldn’t need any justification in taking this out on a 2 person adventure and enjoying the extra space. It packs down well and could easily be split between 2 or 3 people so it would hardly take any room in a backpack.

I found the living space to be very comfortable with a wide and tall ceiling. Of course, if used for the 3 person rating, sleeping space would be cozy, but I could see three people sitting comfortably to play cards without brushing up on the walls or ceiling.

There are a couple of features that I find not well matched to the 3 person rating, but they certainly aren’t deal-breakers. First off, there are only two pockets; they are big, but not that big. Secondly, if you were to try to put 3 peoples backpacks and boots in the vestibule, it would likely block the whole entrance. This is sort of an issue with a single door, single vestibule tents, especially if 3 people are trying to share that space. It’s workable, but not ideal.

When setting up the tent, the colour coding was helpful, but I found it less intuitive than other tents like the Big Agnes Tiger Wall or the Sierra Designs Convert.

I found that I wanted to use 8 stakes when I was staking out the fly, but the Bolt only comes with 6. I made do with what I had, but there weren’t enough stakes for all the stake-out points along the fly, and that wasn’t even including the separate guy-out points.

I am also skeptical of the fly at the foot of the tent. It isn’t very tight and doesn’t offer any staking or guy-out options to hold it off the tent body, so I’m curious as to how it would perform in a full-on storm. We did get rained on with light winds and it wasn’t an issue, but as previously mentioned, I’d like to see how it does in more inclement conditions.

The vents on the fly are a great addition to this tent, and really help out with mitigating condensation on the inside of the tent. I like that they can be propped open easily, but lie flat if you want to keep that warm air trapped inside on colder nights.

The light pocket is also a great feature which seems to be increasingly popular in tents these days. It’s a simple feature that makes tent life that much most cozy.

On the whole, this is a great tent. There are a few design features that could use a little ironing out, but nothing that would stop me from buying and enjoying the Bolt UL 3P. The price is totally reasonable, the materials are quality, and the weight and bulk are minimal.