If you’ve never heard of Hollywood Racks, well, you wouldn’t be alone. I hadn’t either. That was until the Hollywood TRS 2 platform style bike rack showed up at the Backcountry Skiing Canada HQ. Hollywood Racks has been making bike racks since 1973 so they know a thing or two about the biz and they are based out of, you guessed it, Los Angeles California. Their tag line is “Simple, strong and secure”, to which they should consider also adding “economical”, as their pricing can’t be beat. The company currently offers up seven trunk/bumper mount racks and eleven hitch mount racks including the newly released TRS 2 and 4 bike racks.  And, just so you know, TRS stands for “Tire Retention System”. 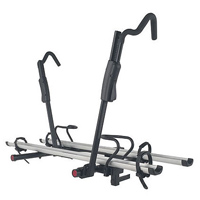 The Hollywood TRS 2 Bike Rack in the upright stored position. 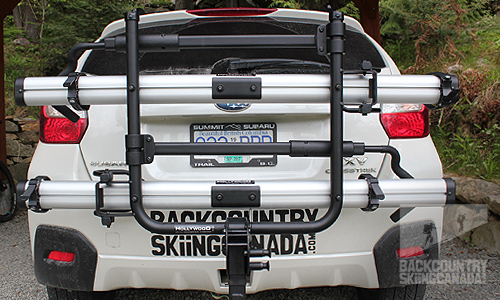 The Hollywood TRS 2 Bike Rack can carry two 50lb bikes with up to 4.5" tires, meaning it’s fat bike ready. It can also accommodate road and mountain bikes with a maximum wheel base is of 48”. Which ever kind of bikes you decide to transport, they’ll be sitting on anodized aluminum trays with built in tire cages and two ratcheting wheel straps per bike mount, one for the front tire and one for the back. Should you have a large or small bike then you can adjust the wheel straps along the trays to accommodate these differing wheel bases. 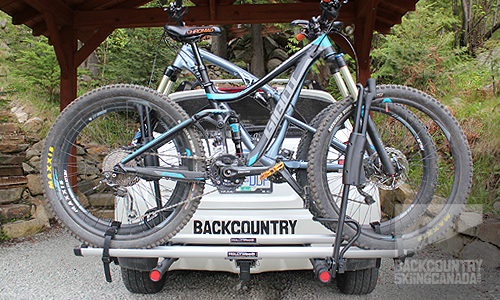 The Hollywood TRS 2 Bike Rack fits a 1.25” and 2” trailer hitch as it comes equipped with a 2” adapter. When mounted on your vehicle and not carrying bikes the rack can be stored in the upright position, flat against your car and out of the way. It can also be tilted down and out of the way of your truck or hatchback, even when fully loaded.

The Hollywood TRS 2 Bike Rack can be seen below prior to loading and then to the right fully loaded. Below this the rack can be seen tilted out of the way of the vehicle tailgate. 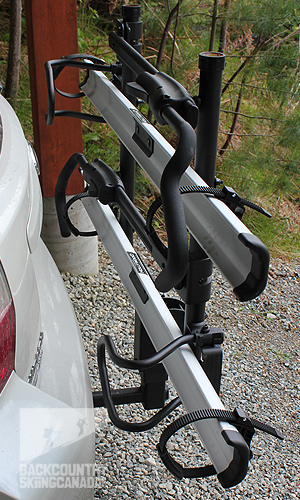 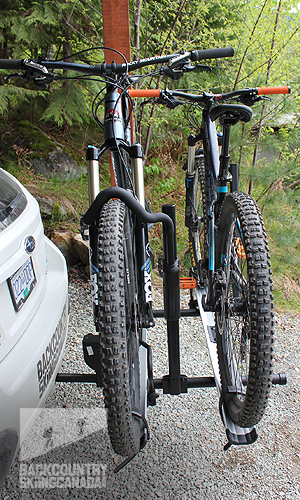 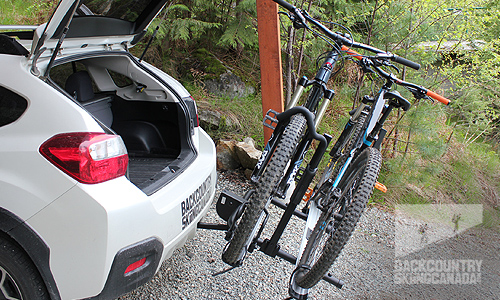 When you purchase the Hollywood TRS 2 Bike Rack you may want to consider also purchasing the locking hitch pin and security cable, along since they are not included with the rack itself. It’s always a good idea to secure any bike rack to your vehicle and your bikes to the rack and for $34.95US it’s a solid investment. It you want a rack that has these security feature built in then you’ll have to consider purchasing the Hollywood Sport Rider two or four rack models.

Priced at just $475CAN / $329.99US, the Hollywood TRS 2 Bike Rack is the least expensive bike rack we’ve reviewed to date and offers exceptional value for those looking to get a platform bike rack that won’t break the bank. 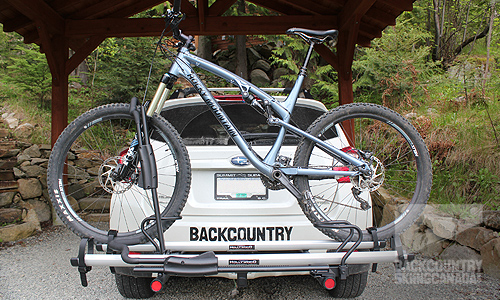 
The Front tire retention arm is padded and has an oversized adjustment lever that is really easy to use. 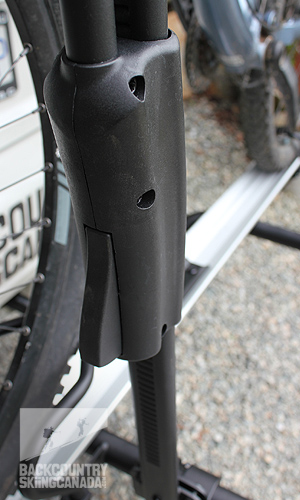 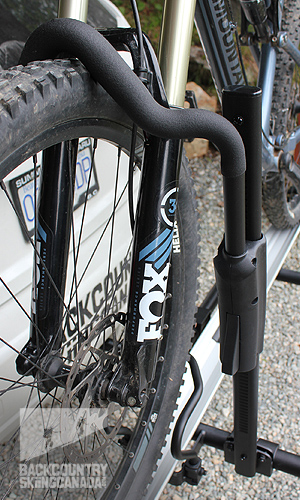 Reflectors are a nice safety feature that I have not seen on other bike racks regardless of price. 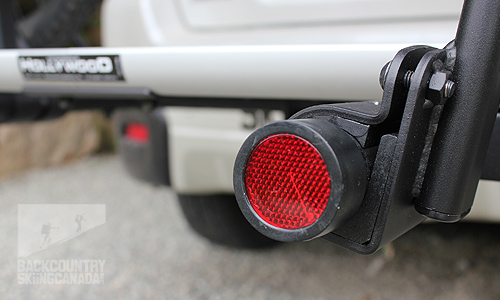 A simple bolt and cotter pin are all that are used to affix the Hollywood TRS 2 Bike Rack to your vehicle, a locking hitch pin is a mandatory upgrade. 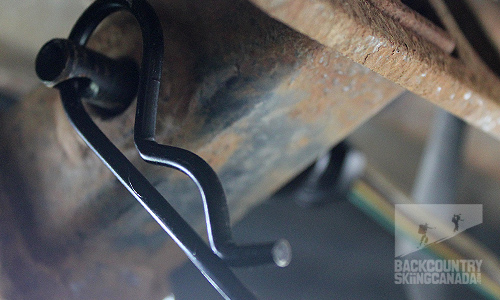 The raise/lower knob and tilt know can be seen below along with the bolt and cotter pin that need to be removed in order to tilt the rack. 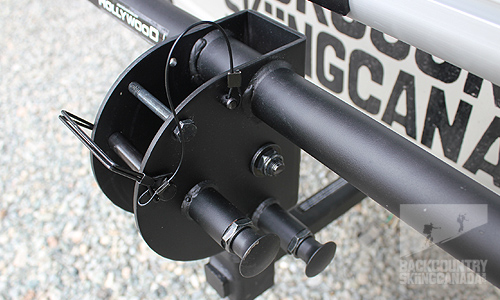 Tire retention straps can be found on the front and rear tires along with a front wheel stop. 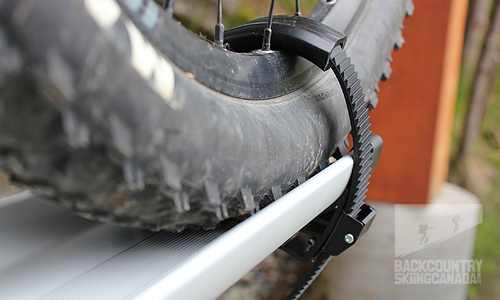 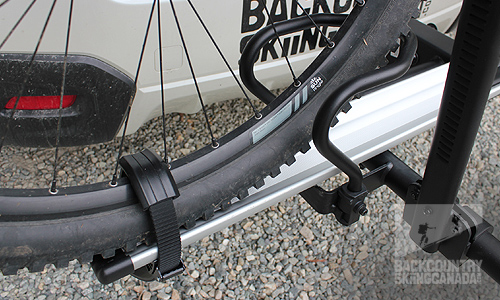 The Hollywood TRS 2 Bike Rack may not be the most feature rich platform rack on the market—at least not right out of the box. Sure, you can add on an anti-rattle hitch lock and bike lock but these items increase the overall price, which is one of the main benefits of the  Hollywood TRS 2. At just $475CAN / $329.99US, it’s much cheaper than the Kuat NV 2.0 priced at $849.99, the Thule T2 Pro at $679.95 and even the Yakima DrTray Bike Rack at $769.99 (all prices in Canadian dollars). With a savings of over $200 you can’t expect the Hollywood TRS 2 to have all the features of those higher priced racks but It does, however, come with a 2” hitch adapter which is a nice touch as not everyone’s vehicle sports the smaller 1.25” hitch.

There’s also a weight penalty with the Hollywood TRS 2, at 52 pounds it’s one of the heaviest bike racks we’ve reviewed, with only the Thule T2 Pro tipping the scales higher. With the additional weight, however, comes a whole lot more rugged construction. The TRS 2 is burly and can accommodate two bikes up to 50lbs which is 5lbs more than other racks.

Another point to consider is that the Hollywood TRS 2 took a long time to assemble as there are just so many parts to put together. This is one way that the manufacturer saves on money and then passes the savings along to you, along with the additional work, sadly.

Because there is no built-in cam on the hitch of the Hollywood TRS 2, it tends to rattle and bounces around on bumpy logging roads while driving to the trail head. I’d highly recommend getting the version with the anti-rattle hitch, it uses a cam to ensure there that the tolerance between rack and hitch are minimal.

The tilt function of the Hollywood TRS 2 is also little awkward to use as there are two pins to chose from and accessing them while the rack is fully loaded can be challenging as they are located above the hitch and not at the outside end of the rack like on racks from other brands. Once you figure out the process it’s not that big of a deal, but still not ideal mind you. Tilting the rack out of the way of your trunk or hatchback also proves to be a little labour intensive as there's a cotter pin and bolt which must first be removed and then replaced. It’s just one more step in what should normally be an otherwise simple procedure. And lastly the overall the design of the Hollywood TRS 2 will not win any awards as it is very utilitarian when compared to those higher priced versions from Kuat, Thule and Yakima, but again they will cost you upwards of 50% more.

On the plus side, the Hollywood TRS 2 has built in reflectors so that vehicles can still see you when your tail lights are partially obscured by the bikes you're transporting. And, you don’t have to worry about your bike falling off the rack as it is held in place by in four places, the wheel stop, the hook on the front tire and not one, but two straps, one on the rear tire and a bonus strap on the front tire. This is a nice touch that other brands over-look.

The decision comes down to price versus options when considering the Hollywood TRS 2. If you are willing to pay more then you can have it all, but if you’re like most and your bike costs more than your car, then you’ll likely need to save a few green backs on the price of your rack. Saving money with out sacrificing quality always wins in my books.