While the majority of alpine touring boots we review here at Backcountry Skiing Canada are more touring than alpine, the new Dalbello Lupo AX 125 C Boots are equal parts of both. Classified as a “Freeride Touring Boot”, the Lupo AX 125 C’s combine the feel of a touring boot with the performance of a downhill boot.

The Lupo line of boots has been around a few years now but for fall 2017 Dalbello has overhauled the lot. This refined Lupo line now has six new boots to choose from, the Lupo Factory which was previously called the Lupo Ti (reviewed here), Lupo 130 C, Lupo AX 125 C, Lupo ZX 120, Lupo AX 115 and for the ladies the Lupo AX 110W. Each of the numbers in the respective names refers to their flex rating and the ‘AX’ suffix refers to the wider version of the Lupo. 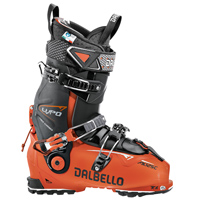 Watch the following video review for all the details. 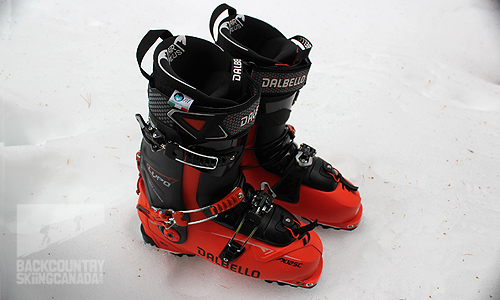 I chose to review the Lupo AX 125 C Boots as they had the lightest weight relative to their flex in the Lupo line. While the Lupo 130 C or the Lupo Factory do have a 130 flex, I was more interested in saving overall weight as 125 is plenty stiff for this reviewer. The Lupo AX 125 C is built on a 100mm last which suits me just fine as I like to have the additional interior space for my slightly wider than average foot. While the Lupo AX 125 C Boots are not for sale until fall 2017, I was lucky enough to get an advanced pair to test this spring in and around Whitewater Ski Resort here in Nelson BC. Given that Whitewater is a meca for backcountry and slack country terrain I am always on the look out for a boot that can tame the toughest terrain in bounds while not sacrificing anything beyond the boundaries. 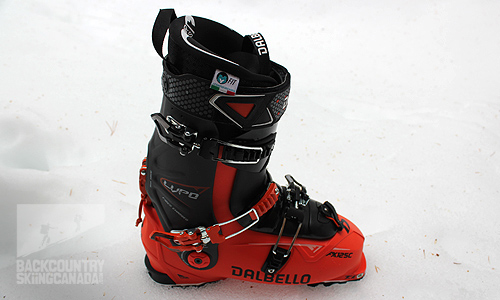 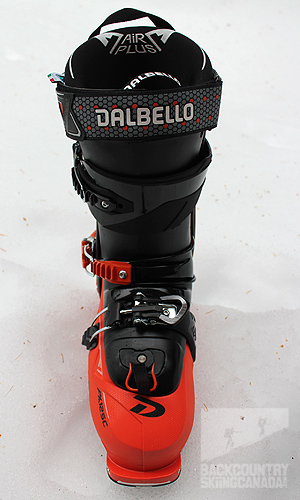 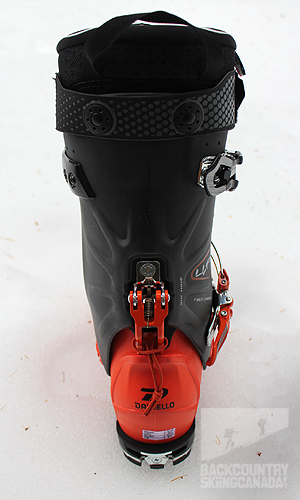 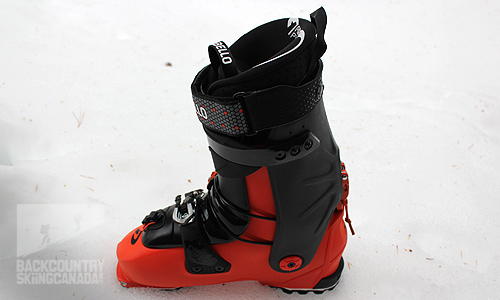 “Uphill comfort, downhill performance” is the claim of the Dalbello Lupo AX 125 C Boots and with a 67° cuff rotation (with the tongue removed) and super warm and comfy IF Air Plus Liners, the AX 125’s have comfort licked in ski and walk mode. The three-piece cabrio design (shell, tongue and cuff) get the majority of their stiffness from the tongue, but since it’s able to flip out of the way, the Lupo AX 125’s are far easier to get into when compared to a traditional overlap construction boot which tend to be more difficult to get in/out of as the weather gets colder. 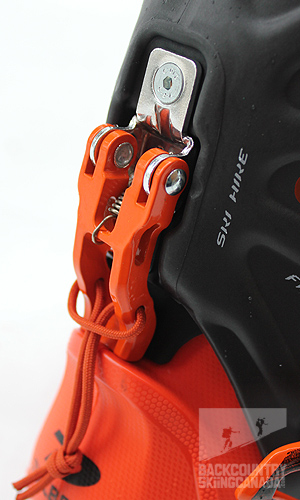 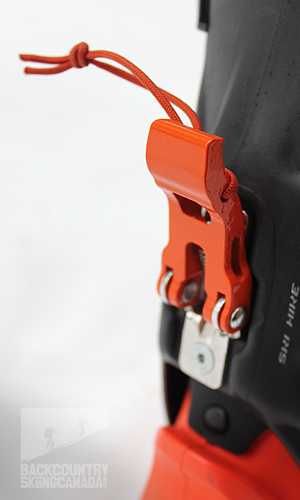 With the tongue removed you not only save 200g per boot but your range of motion goes through the roof with 40° to the front and 27° to the back. The built in gaiter keeps snow away from the liners and allows you to buckle the boots up with out the liner laces getting in the way. When it’s time to go down, pull the tongues from your pack and pop them back in for the full alpine performance. This is when the Lupo AX 125 C Boots really shine with as they feel much beefier than they actually are. 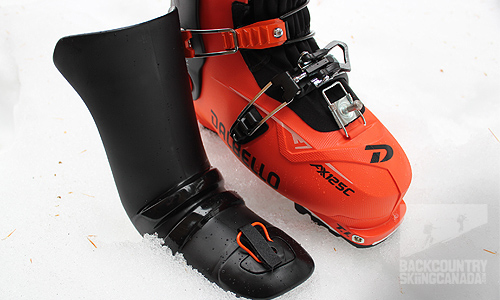 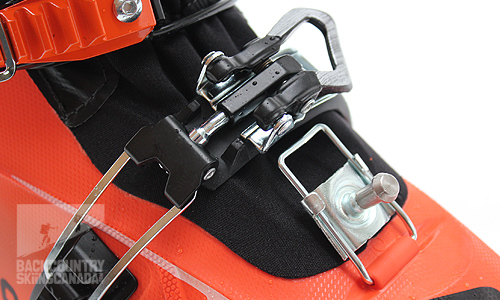 The Lupo AX 125 C’s foot hold is pretty impressive for a boot with just three buckles and a power strap. Your heel is ideally situated at the back of the boot in the pronounced heel pocket thanks to the mid buckle situated over your forefoot.

At just 1650g per boot with the tongue in and 1450g with it out, these are seriously light boots especially given their flex rating of 125. With numbers like these, it’s no wonder the Lupo AX 125 C’s are able to deliver unmatched downhill performance, but not to worry they won’t slow you down on the skin track, even though they ski like a true alpine boot.

One of three buckles, this one is primarily responsible for seating your heel at the back of the boot, where it belongs and the one below over you toes is shown in open mode. 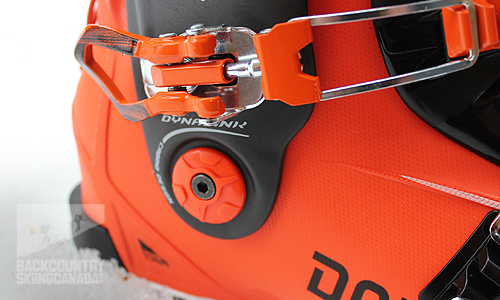 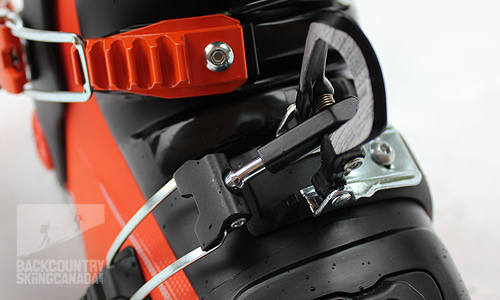 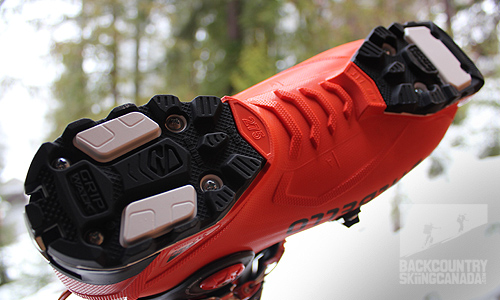 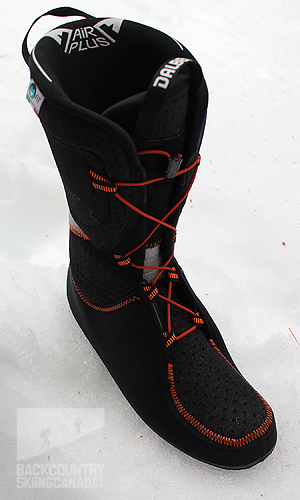 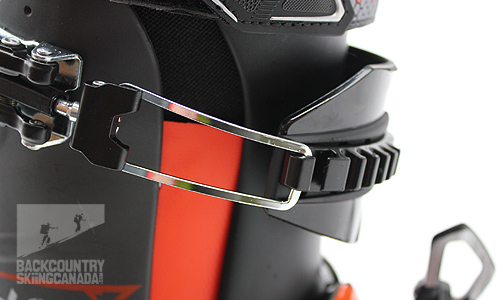 Built in gaiter keeps water and snow out and provides an incredible 67° of cuff rotation. 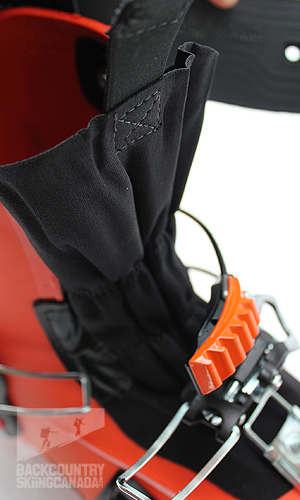 This is the 6th Dalbello alpine touring boot that I’ve reviewed, and so far my favourite given their high performance, low weight and ease of use. The Lupo AX 125 C Boots use the same three-piece Cabrio design as all the rest, which enable it to have a super easy in/out access as the tongue flips up and out of the way. Additionally, the location of the middle buckle is ideally situated to pull your forefoot back and snuggly position it into the boot’s heel pocket. While the tongue provides the majority of the boot’s stiff 130 flex it is removable so that you can enjoy the full 67° cuff rotation on the skin track. This is a feature carried over from the Lupo Ti (reviewed here) which is now called the Lupo Factory. A built-in gaiter keeps snow out of the liners while the tongue is removed and also helps keep the liner’s laces out of the way and contained. While a great design in principle I do questions it’s long term durability as I have already started to see wear on the gaiter where it meets the boot’s shell.

If you leave the tongue in then your range of motion while you walk is severely restricted, even with the buckles and power strap fully loosened. While this configuration is fine for walking around the day lodge at your local ski resort, you’ll want to remove the tongue for skin track laps. While this only takes a few seconds to perform, it is still an additional step when switching over from ski to walk mod e and so may not be for everyone. Also when the tongue is removed the aesthetics of the boot is not as clean and slick as it is with it in place as you are left with a rather bulky and utilitarian metal hinge point on the forefoot of the boot where the tongue was fastened. It would be nice it this could be improved in future designs.

The fit straight out of the box was impressive with the IF Air Plus liners being super comfortable. Only minor boot fitting alterations were required for optimal fit and my initial desire for an Intuition liner quickly waned. My foot was held comfortably in place and I was able to feel the full performance of the Lupo AX 125 C’s while skiing laps at the resort. Once out touring the Lupo AX 125’s were slightly heavier than what I was used however it was a minimal amount given their 125 flex rating. While this wouldn’t be my AT boot of choice for long, multi-day backcountry sorties it is ideal for those who like to ski hard and demand more from their boots than simply shredding pow.

Overall, the design, functionality and performance of the Dalbello Lupo AX 125 C Boots are top notch with only minor improvements on my wish list, as you can see below in the pros/cons.