In the last few years mountain bike tire inserts have become quite common and Cushcore is among a handful of companies that offer a foam layer that sits between the rim and the tire. Cushcore, in contrast to other foam inserts for tubeless setups is both low density and highly impact resistant meaning the foam is meant to survive multiple knocks. Cushcore not only protects the rim from impacts but also acts as an inner tire suspension system due to the ability to run lower PSI.  Many racers on the Enduro World Series run Cushcore and on the Ainsa, Spain leg, Cushcore riders Richie Rude and Martin Maes finished 1st and 2nd respectively in the men’s category. 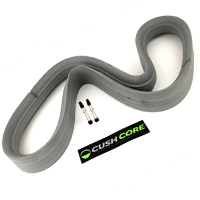 Cushcore claims are mighty, but does the product deliver? Read on to find out. 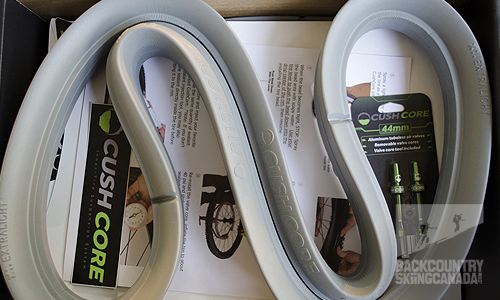 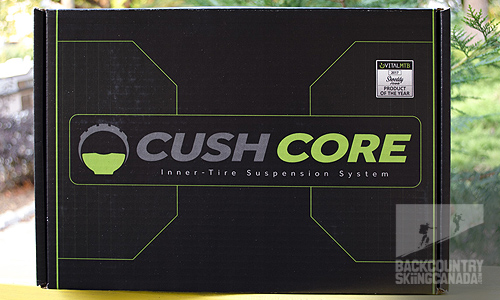 The installation of Cushcore onto your onto rims is supposedly straightforward after reading the instructions and watching their online video tutorial. Simply, seat the Cushcore onto one side of the rim and with the help of some type of leverage device, in this case a hammer, in order to seat the other side on. 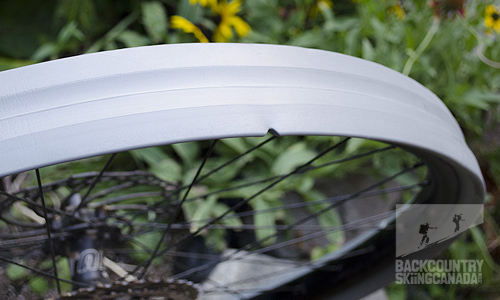 Once the Cushcore is on the rim with some help from some soapy water the tire can be seated, sealant added, and away you go. Cushcore can be ordered a la carte, either as a single or in pairs. Valves can be ordered in pairs. 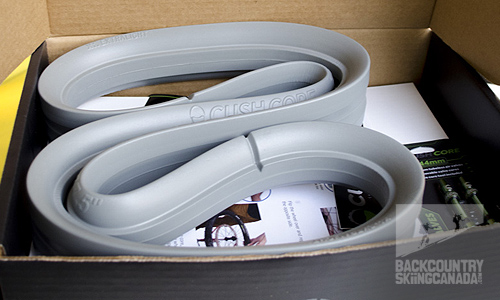 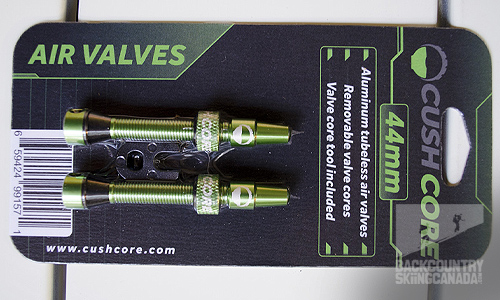 Compared to standard tubeless tires, CushCore provides up to: 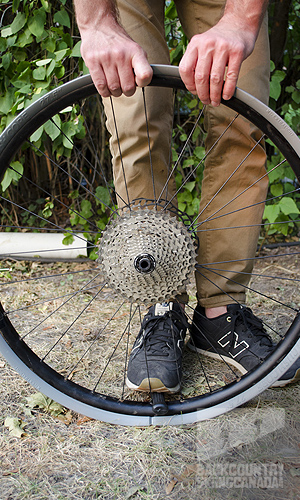 After spending over an hour and multiple attempts at a few methods for mounting both the Cushcore and the tire to the rim I surrendered and took it to my local shop because I knew they had already installed a few and knew the tricks to getting it mounted. Cushcore instructs users to mount the insert onto the rim first and then get the tire seated first on one side and then the other as you would in a normal tubeless setup. However, this is very difficult and frustrating. The other method not endorsed by Cushcore is to seat one side of the tire and then insert the Cushcore and finally seat the opposite side of the tire. Again though, this is just as difficult and frustrating as the first method. If you are installing at home, set aside some time, watch the video Cushcore has online, and be very patient.

Installation issues aside, once out on the trail Cushcore proves its value immediately. I mounted one Cushcore on the rear rim of my hardtail. I normally run 32 PSI to prevent rim dings and even at that I seem to manage to dent a rim within a few months. Running a hardtail at 32 PSI is not exactly the most forgiving setup so when I ran my tire at 22 with Cushcore on my first test ride it was a revelation in the potential comforts of hardtail riding.

The first noticeable difference is the decreased rolling resistance and increased traction while climbing. Rather than having the rear deflect off roots and rocks the tire complies with the terrain and rolls over obstacles with ease. The rear tire is no longer constantly fighting for grip it just kept on rolling. This fall has been rather wet compared to the summer and having the extra grip with lower pressure has been appreciated. In numerous rides on wet, greasy roots I’ve yet to spin out while climbing.

When it came time to point things downhill the Cushcore proved equally impressive. No longer was there a worry of dinging the rim. I was sceptical of Cushcore’s claim of it being a tire suspension system but they are right. Cushcore takes the sting out of riding a hardtail. The bike feels much more balanced now rather than having a plush front end and a rock hard rear. As well, the rear tire tracks much better. It holds a line rather than jumping and skipping off the ground as is normal with higher pressure.

I’ve already managed to bottom out on the Cushcore a number of times on rocky terrain and the feeling is very damp as opposed to that jolt you get from hitting the rim.  So far no rim damage has occurred.

Overall, installation issues aside, Cushcore truly is an amazing product that transforms the feeling of a bike. The extra weight the insert adds to the wheel is not noticeable at all on the trail, climbing takes less effort, traction is increased, and rim dings are now a thing of the past. One thing to keep in mind, if you do manage to flat with Cushcore; although it’s possible to ride it out on short distances if you are on longer rides you’ll want to install a tube which means going through the laborious process of getting the tire off the rim and then getting the Cushcore off. Then you’ll have to carry the Cushcore out with you. This may prove to be a non-issue but it’s something to note.