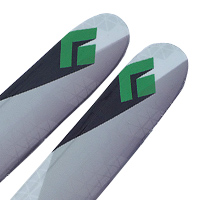 For 2011/12, the Black Diamond Justice has seen some considerable changes and I’ve been itching to get my feet on a pair since I spied prototypes on the internet earlier this year. Recently, Backcountryskiingcanada.com received a set to review and with the never-ending winter we’ve had in BC, I jumped on them right away. First impressions are always important, and the Justice didn’t disappoint.

The Black Diamond Justice are an almost entirely new ski, utilizing Paulownia wood and carbon in the core Black Diamond has been able to reduce the weight of the Justice by a full pound. Now part of Black Diamond’s new “Efficient” series, they are a wide (112mm underfoot for the 175cm length version we skied, 115mm underfoot at 185cm) and relatively light (3.6 kg / 8lb per pair at 175cm) backcountry slaying sticks. 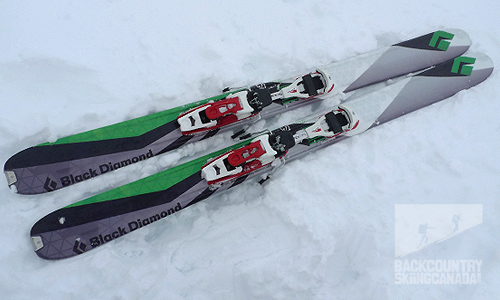 The early May conditions in the Rossland Range were variable for my first ride on the Justice – 30cm of wet powder over a 4 metre base of schmoo. Heavy, easy releasing sluff meant careful line choices and a bit of excitement, but it was enough to get a feel for these lively skis.

The Justice isn’t overly stiff but did respond well to aggressive riding thanks to the Formula One Technology and Torsion Box cap construction. The rockered tip and slightly rockered tail were predictable and kept the tips floating nicely. I really appreciated the light swing weight of these skis – I could put them wherever I wanted and were especially fun when the going got steep. 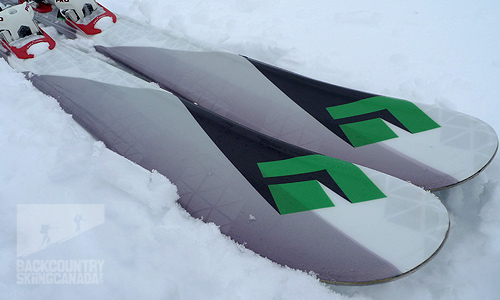 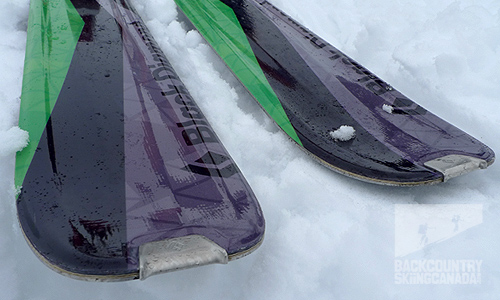 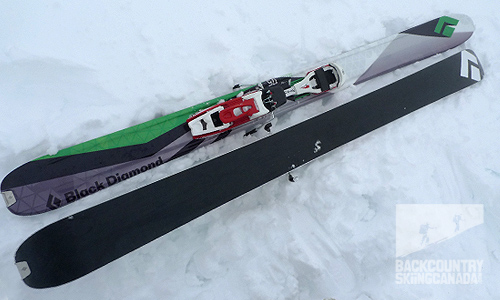 Given the limited time I had with these the Black Diamond Justice so far, I’d say Black Diamond has improved them in many regards, making it a true contender in the powder-oriented backcountry market. They had the feel of my 2010/11 Black Diamond Megawatts without the girth and weight. If you’re in the market for a new pow-slaying backcountry ski that doesn’t have the weight penalty for the up but is still enough ski to get after it, I’d say the Justice is right up there.

Stay tuned for a full, detailed review of the Black Diamond Justice coming in the fall of 2011.

Fast forward to winter 2011/2012:
After not having enough time on variable snow conditions and some good POW in the spring of 2011, we were finally able to get several days on the Black Diamond Justice Skis and they continued to impress. The Justice skis are part of the efficient series and as such are a pleasure to cruise up the skin track on, for a fat 138cm ski these babies do not weight you down. In the Pow they floated as expected and were a good balance between a really stiff responsive ski and a soft forgiving ski. The Black Diamond Justice could thrash the powder lines and also tame the variable conditions we found on a few of our outings. On the in-bound groomers, the Justice skis was not as easy to ride as they were in the backcountry but they got you down the hill. Given the dimensions of the Justice skis it is understandable why they are made for the backcountry or powder day at the resort.

Fritschi Diamir Freeride Pro Binding
The Black Diamond Justice skis were mounted with the Fritschi Diamir Freeride Pro bindings which have a DIN range of 4-12 and weigh in at 2.2kg or 4lb 8oz. With four height adjustments at  0°, 3°, 9° or 13° of lift they provide lots of choice while climbing. The new wider base plates allow for better transmission of power more evenly across todays fatter skis. The Freeride incorporates 'Gliding Technology' which places the pivot point on the toe piece behind the toe of your boot and combined with the moving baseplate allows you to raise your foot until it is completely perpendicular to the ski which results in a more natural stride when skinning. The price point for the Fritschi Diamir Freeride Pro binding is $499.95 US. 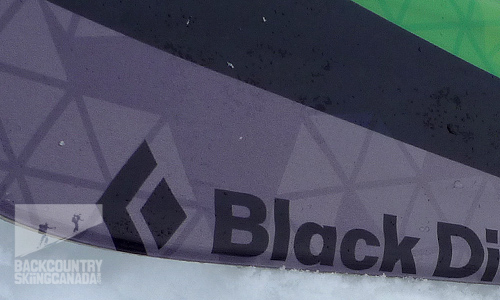 Light and responsive for aggressive riding.