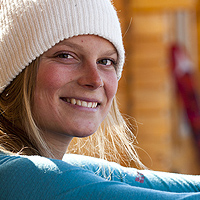 Presented by The North Face this is an interview with professional freeskier Angel Collinson. Angel is featured in the Sherpas Cinema movie Into the Mind that will be shown September 28th in Whistler. Enjoy the interview and keep an eye out for the film tour at a theatre near you.

Angel Collinson is 23 years old and lives in Little Cottonwood Canyon Utah. She grew up skiing the nearby resorts of Alta and Snowbird. Recently, Angel and her younger brother Johny also a pro skier built a home for themselves out of an old abandoned warehouse at the base of the canyon. This was a family construction project that allows them to both call the mountains they grew up around home.  In the last two winters Angel has filmed with TGR and Sherpas Cinema after being invited to start filming with both companies as a result of her outstanding achievements on the Freeskiing World Tour in 2010 and 2011. Angel is sponsored by The North Face, Smith Optics, Backcountry.com and Black Diamond. Her love for skiing and being in the mountains is infectious.

You grew up with skiing always a family affair, what was that like?
We grew up at Snowbird Ski Resort, my dad was a ski patroller and my mom was a teacher. We were always in the mountains as a family. Both mom and dad are strong skiers and we essentially spent most of our childhood and formative years in the mountains. 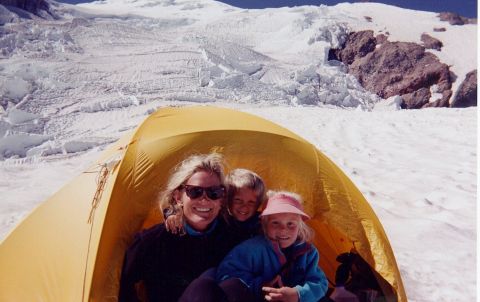 Did you travel much at a young age?
I mostly travelled for racing, we were in school so we stuck around for that and skied mostly at Snowbird. We did go on many trips into the mountains as a family, lot's of mountaineering and things like that. Trips that most parents wouldn't take their young children on. As a result of this early exposure to the mountains, my brother John summited Mt Rainier at age 4. 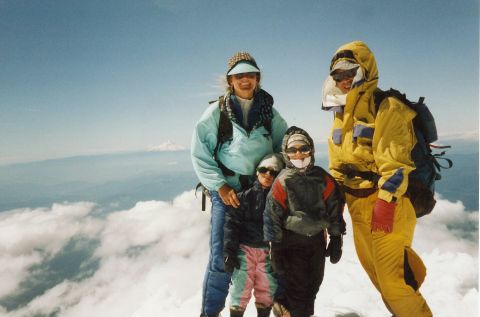 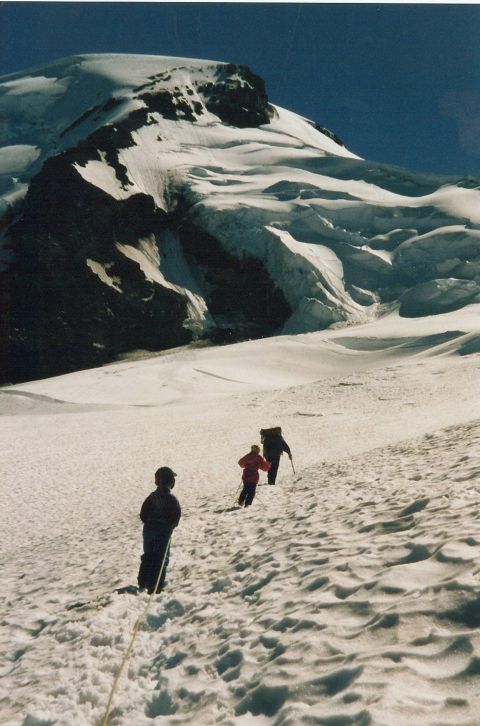 He also set a record for youngest climber to summit Everest too right?
Yeah, when he did it he was 17, youngest at the time, that record has since been broken.

A lot of our readers at the site are backcountry skiers from British Columbia. For Into the Mind you got to ski out in the Kootenays a few times. What can you say about skiing in the mountains here.

I had a great time at Valhalla Powder Cats and Snowater Heli Skiing which is near Nelson, BC.  The terrain is very playful, it's not as big as Alaska but there is a lot of variety.  Perfect balance of excitement with a bit of danger while still being fun.  Also, the learning curve of skiing pillow lines with deep Kootenay powder was steep for me.  I crashed a lot learning how to ski pillows. 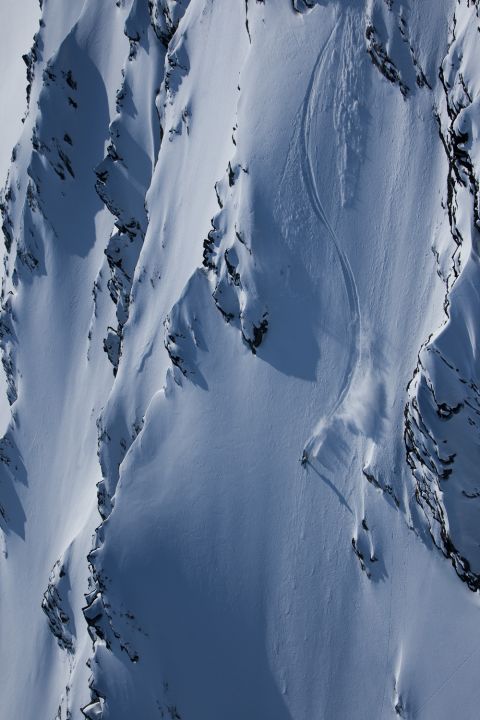 In the last few years you've had the opportunity to ski in both British Columbia and Alaska. If you were to pick favorites what would it be?  BC or Alaska?
Well, that's a really tough choice. They are both very different. In BC you have massive pillow lines, deep powder snow and tree skiing. Alaska is much bigger terrain, mountains and consequences with the larger slopes involved. Alaskan spine skiing is amazing and so fun. Because of my racing background, Alaska style skiing comes more natural to me.  I am still trying to learn how to throw tricks and utilize the playful terrain in BC. I guess in the end I would have to say Alaska is still my favorite as it is an awe inspiring place and skiing there has changed my life.

So Alaska sounds amazing, what's the draw back?
Filming in Alaska, and in the mountains in general, weather is a huge factor. If the helicopter can fly for just half the days that you have your trip planned you are doing well. That doesn't even mean the snow is any good, just that the pilot can see the mountains enough to fly. Most of the time it's socked in with cloud and wind. If you get lucky then you get a lot of fresh snow that's stable with good visability. This is the best case scenario and can make or break an Alaska trip.

When you do have good snow days, those are usually the amazing shots that make it into the film. When you are on a trip you have to be out working and trying to get footage, even if the skiing might not be perfect.  When the snow is bad it's always a struggle to make the skiing look good. Half the shots that end up in the movies might not even be that great of skiing. As athletes we just have to wait for good light and work really hard to make it look fun, exciting and entertaining.

How has your skiing grown from your first trip to Alaska in 2012 to this last one in April with Sherpas Cinema?
I guess that I have learned how to read the terrain better and deal with high consequence lines more safely.  A big part with skiing these larger mountains is sluff management. The mountains are steeper, longer and more complex and tend to generate much more sluff. I feel like I have gotten much more comfortable in these situations and this has allowed me to keep pushing my limits as a skier and do more difficult lines.

Can you share with us an experience from one of your days filming with Sherpas Cinema?  Something memorable?
The last day of the Mt. Hunter trip in Alaska was really memorable. We were camping at the Denali base camp, and it had been a tough trip. We were dealing with bad snow conditions and scratching around to find skiable snow. The nights were consistently 40 below zero. Eventually things started coming together snow wise, and on the last day the three athletes on the trip all got to ski their best lines. There were powder caked spines on Annie's Ridge, it was 8:30 at night. We all nailed the shots with perfect light and timing.  The sun set as soon as I skied out the bottom of my line, and a big storm rolled in. The group's exultation in getting a solid session of riding and filming together after the struggles with weather leading up to this moment will be something I will never forget.   As we skinned back to camp a big storm rolled in the, temperature started dropping fast with the fading light. 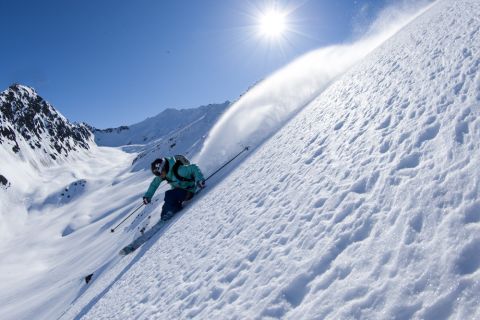 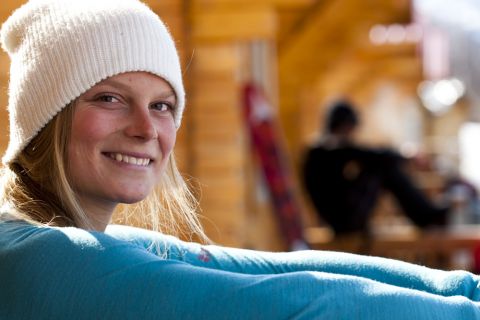 A theme in Into the Mind is how the skiers view risk and balance it with the reward of being in the mountains and feeling alive. Can you give us some insight into your mind and how as a professional freeskier you deal with the risks of big mountain skiing.
Well, the first and foremost way to deal with the risks is by doing your best to be safe and make good decisions before you head out, as well as while you're out there. Being educated and taking the time to observe the conditions is very important. With that being said, Mother Nature can be unpredictable and there is definitely always an unknown factor every time you head out. Personally I am aware that every time I go skiing, things could go wrong and end up terribly. Knowing that tragedy is always a risk inherently leads to the next question. "Is it worth it?" And my answer will always be, "Yes!"  Skiing is what makes me feel the most alive and it gives me a reason to live. That's about the most important reason I can think of to do anything. Driving in a car is very risky, but we don't always stop to think about how dangerous it is every time we get in the car. It's all a matter of perspective I guess, but being as safe as I can and enjoying what I do everyday is my approach skiing and to life.

In one of our previous conversations we talked about how there's an increase interest in female freeskiing athletes.  Why do you think this is?
I think that women are starting to realize that skiing isn't just about testosterone and hucking huge cliffs. Women can have just as much fun on skis and get after it with just as much enthusiasm as the guys. I also think men want to see women out there ripping too. Those two things combined I think have driven the growth  and increased interest in women's skiing we are seeing.

Is there a sense of responsibility you have to other women to showcase your talents in a certain way or do you more just focus on being an athlete and becoming better as a skier regardless of your gender.
Well, I think that I just focus on being an athlete and pushing myself. I hope that my skiing will speak for itself, if I work hard at it and give people something fun to watch. The responsibility lies in making sure I'm always making myself a little uncomfortable and pushing my boundaries.
What's your biggest strength, what makes you stand out from other skiers?
I guess a strength of mine is I can ski technically pretty well, mostly because of my racing background and all the time I spent doing drills and working on my skiing.

What do you bring to the table on a three week long trip that to the mountains that other athletes might notice?
I try and always bring a good attitude to the table. Working in a group like you do with filming, it really makes a difference if someone is always chipper instead of bummed. It can be easy to get frustrated on a three week long trip. Everything from  struggling with mistakes with the cameras running, fighting weather, you name it.  The game can get you down if you don't feel like you're crushing it. Keeping things in perspective and remembering the basics of why I ski makes things more fun and helps the group dynamic.

How do you want to improve in the next few years, what area of you skiing do you need to work on?
I'd like to work on tricks and stomp bigger airs. I also think that I can ski more cleanly on the big lines.  Always working on getting better.

So after the fall season of film tours and athlete appearances, what do you have planned for winter?
As of right now, I have no idea where I'll be going this winter. I'll definitely be filming with Teton Gravity Research again and hopefully have some free time as well to work on my skiing.

Thank you Angel, have a great winter!  Drop us a Line if you want to go ski touring with the Backcountry Skiing Canada crew in Nelson.
You're welcome, I'll let you guys know if I am in Nelson. Touring sounds fun. 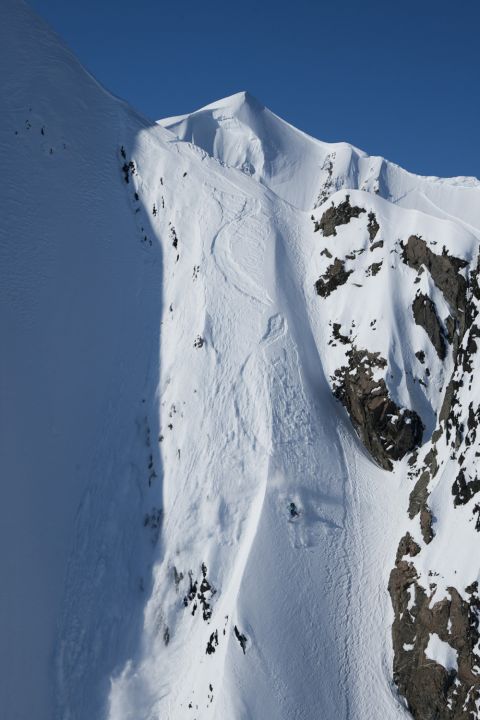