For 2017 Osprey updated the classic Aether and Ariel backpacking/ mountaineering series to include their Anti-Gravity™ technology which we first looked at two years ago in the Osprey Aura and Atmos series. I have been backpacking with Osprey packs for ten years now and Backcountry Skiing Canada has been reviewing them for six years of those. In fact this will be my third generation Ariel 65L backpack. In my experience each evolution of the Ariel (and Aether) has been worth the upgrade though I have to say after four years with the 2013 edition I was pretty content—it was a workhorse, great for carrying loads, not always super comfortable for someone who doesn’t carry a lot of natural padding but about what I would expect for a pack designed to carry weight on multi-day trips. I wouldn’t have changed much but as with so many things in this life once you get a taste of ‘more’ then there is no going back and that certainly is how it feels with Osprey’s new Aether AG and Ariel AG series. In fact when we sat the Ariel 65 (2013) beside the Ariel AG 65 (2017) model the enhanced structural integrity in the later model became visibly noticeable. 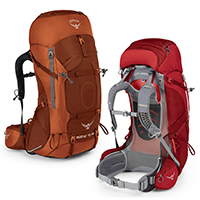 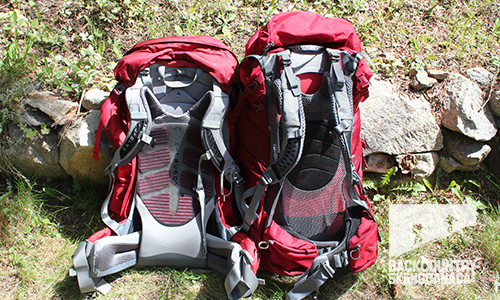 A four day hike through the Grand Canyon, Arizona in early June gave us a chance to put the pack through it’s paces and really appreciate the enhanced breathability and weight distribution the new design brings. 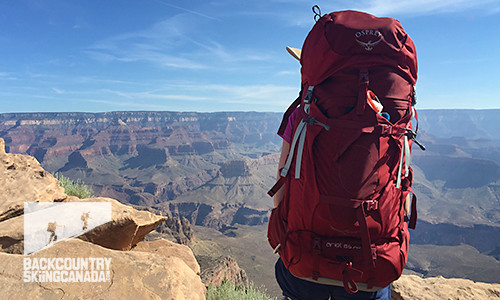 So what’s the big update all about? Lets take a closer look.

We first talked about the AG AntiGravity Technology in reference to the Osprey Aura and Atmos series packs released in 2015, it was this carrying technology that afforded those packs our Gear of the Year award at that time and led to the Atmos being one of our reviewers favourite pack. The Ariel 65 AG and Aether 70 AG are designed to carry up to 60lbs, ideal for a long weekend or a week long adventure. Now with this back system the distribution of weight has been innovated by combining multi-dimensional suspension with a tensioned lumbar support, helping the pack and its contents to move with your body.

At the foundation of the AG AntiGravity Technology system is the suspension system, which uses a Lightwire™ tensioned full peripheral frame designed to distribute pack load evenly. A continuous back panel made of lightweight tensioned mesh that extends from the top of the back panel to the hip belt. It’s this mesh which helps the pack contour to your body and move with you. 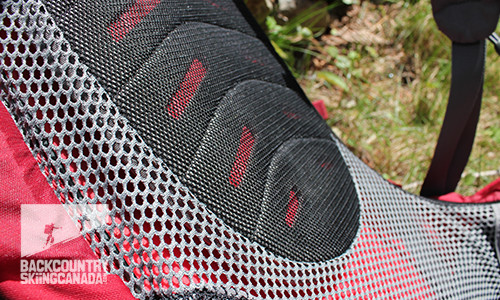 The carry system is finished off with Ospreys signature Isoform5 AntiGravity Mesh Harness and Isoform5 CM™ Hipbelt, each offered in interchangeable sizes for a more precise and personal fit. 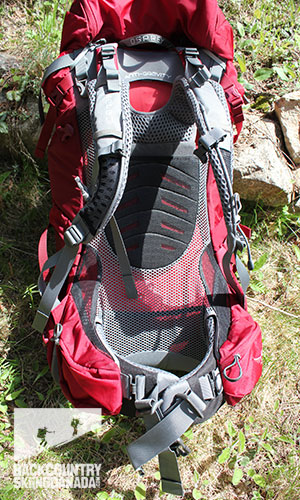 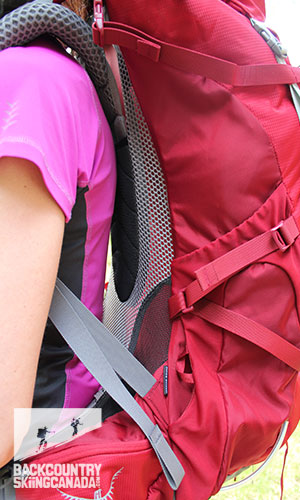 The hipbelt, as with previous generations is heat moldable but I’m not sure that this is absolutely necessary as the Isoform5 wrapped in mesh is a lot cushier on the hips than it’s predecessor. I didn’t have my hip belt molded and I felt there was no required break in period. It’s worth noting however, the hipbelt now comes pre-contoured so it wraps your body clam shell style, as you can see in the above image. This takes a bit of getting used to when putting the pack on but the support it offers is worth the additional effort of opening up the hip belt as you put the pack on. 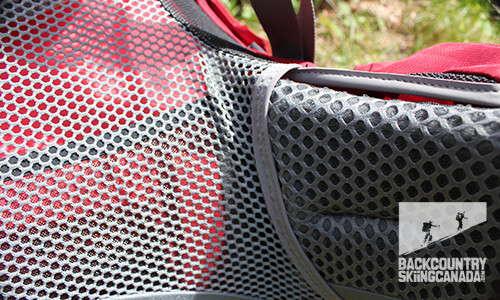 Extending from each hip belt behind the lightweight Antigravity mesh is a sturdy fine mesh bridge that connects the hip belts and pulls into the lumbar to further support heavy loads. 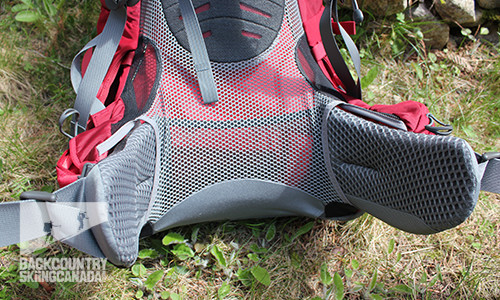 The Isoform5 AntiGravity Mesh Harness is suspended with a structural load lifter bar for weight transfer. 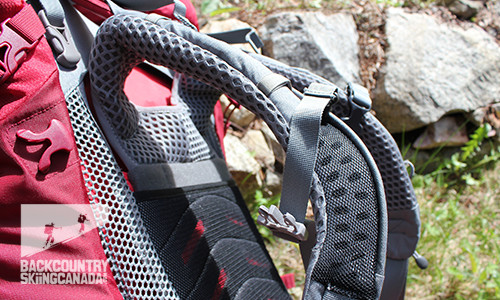 A step up again from it’s predecessors, Osprey has enhanced the cushioning of the straps and also the breathability by using a die-cut foam lower and mesh ExoForm wrap upper. The straps themselves feel more substantial and further articulated to the body as compared to previous generations. 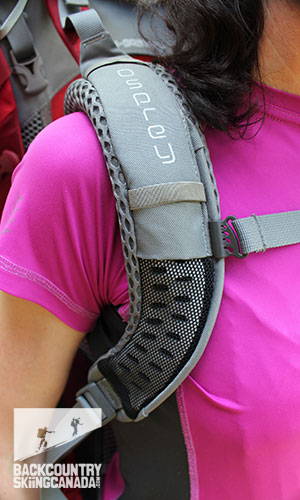 The harness continues to offer adjustability at the back to adapt to different torso lengths. 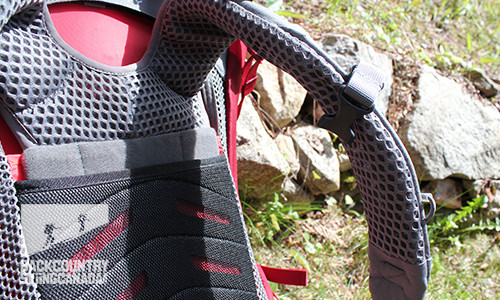 This pack enhancement deserves a drum roll. The top lid of both the Aether and Ariel pack series now converts into a fully functioning, comfortable, lightweight day pack which will come in handy for those summit bids and exploratory day trips from base camp. The day pack comes complete with hydration sack compartment, sternum strap, two zippered compartments and an ice axe loop. Based on my research online this feature is only available in North America. The top lid on the European editions while still removable offers an integrated & detachable rain cover in place of the convertible daypack. 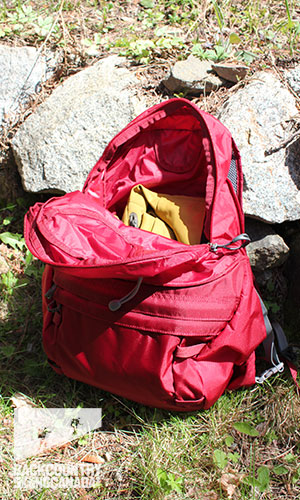 A great size for side trips, the Day Lid Daypack fits to the body comfortably. Shown here at Ribbon Falls, Grand canyon, Arizona. 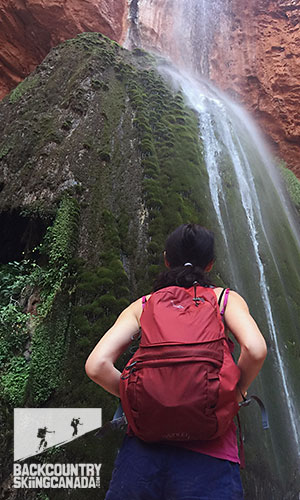 When strapped back on the pack, the top lid also now features two pockets instead of one which helps to organize your gear. 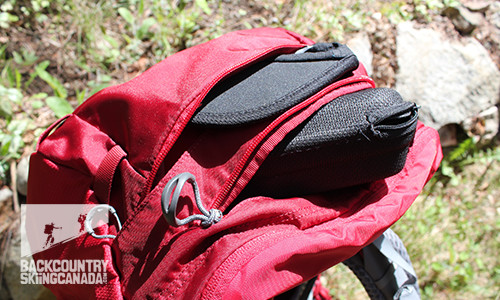 This featured goes hand-in-hand with the removable/convertible top lid daypack just mentioned. With the top lid of the pack removed you can close the pack up tight with the Flapjacket which buckles into the front vertical compression straps. This also gives you the option to remove the top lid altogether for trips where you need to travel lighter. 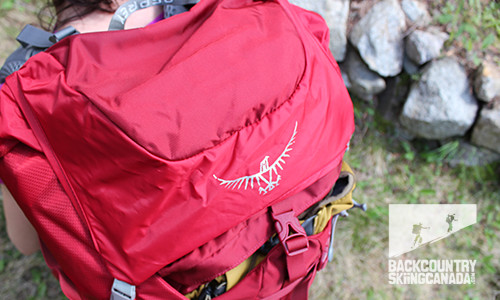 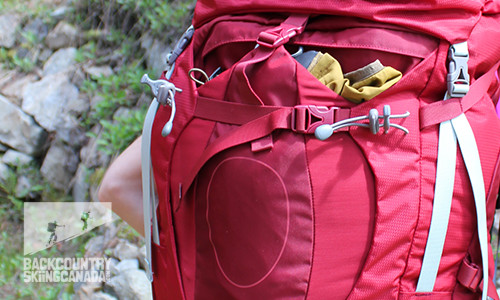 Above the sleeping bag base compartment with internal divider you will now find the twin ice axe loops can be hidden away when not in use, demonstrated below with the loop showing on the left and hidden on the right. The sleeping pad straps at the bottom continue to be removable. 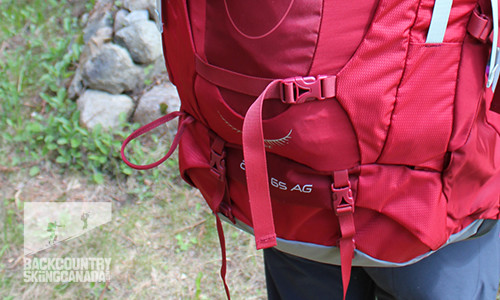 Side pockets with InsideOut™ compression now come with stretch mesh to provide even easier access to items such as water bottles on the go. 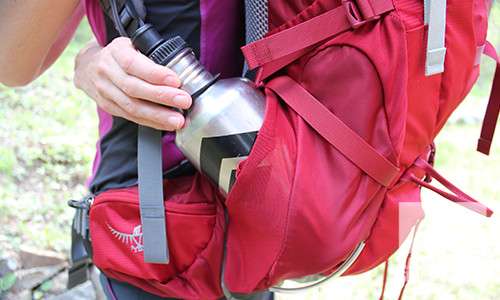 This ain’t new but still a favourite addition from 2013, twin zippered hipbelt pockets allow easy access to devices and snacks and are much larger than those found on the Aura and Atmos packs. 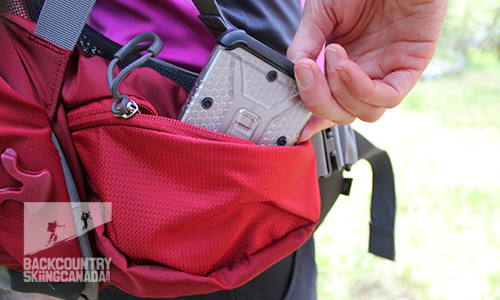 Other classic features that continue to be integrated on the Aether and Ariel pack:

The Aether AG 70 for men comes with updated colours and darker mesh on the carry system, shown here in Outback Orange. You can also see how the pack fits closely to the body. 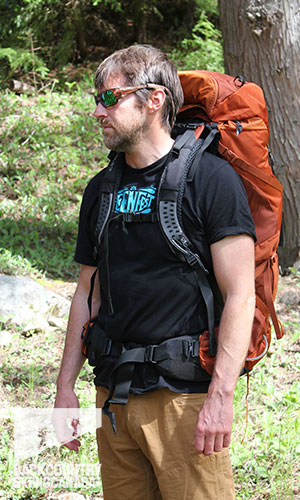 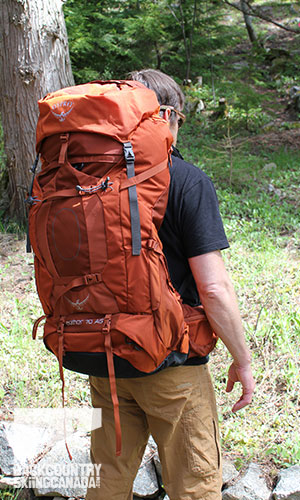 The Ariel AG 65 for women also comes with updated colours for 2017 shown here in picante red with a light load and fully loaded on descent into the Grand Canyon. 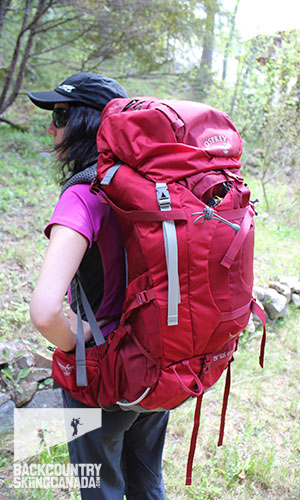 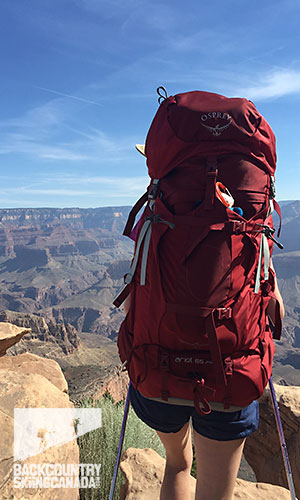 It’s worth checking out the owners manual available on Ospreys site for full details on pack fitting. And keep in mind all Osprey packs come with Ospreys ‘All mighty Guarantee’ offering repair or replacement of any damage or defect in their product.

It’s satisfying to see how far a product can evolve over time and this is especially true when there is integrity in the design and workmanship from the get go. Over the 10 years I have been backpacking, mountaineering and ski mountaineering with the Osprey Ariel backpack I have appreciated it’s sturdiness, adjustability, reliability and fit. A few weeks ago I went hiking with a friend who had a twelve year old Ariel in beautiful condition with all of these qualities still at the core of the product’s design. It’s worth checking out the history of Osprey to understand the commitment and focus they have when it comes to manufacturing and design.

The 2017 upgrades mentioned in this review grace a pack that has a proven track record when it comes to carrying heavy 60lb loads over multiple days. The 2017 upgrades to the carry system feel equivalent to going from a hard tail to full suspension mountain bike where the riding or in this case carrying is a whole lot easier on the physical body.

The Ariel and Aether are not ultralight packs nor are they designed to be, they are made to carry weight and now with the introduction of AntiGravity™ Technology in the carry system the weight distribution feels more even and frankly a lot less work to shoulder. When hiking 5000ft down into the Grand Canyon last month the weight of a fully loaded pack was the least of my worries, it was more the heat. These conditions however provided an insight into how much the breathability has improved with the addition of the AntiGravity™ system as the mesh allows for less contact with your skin and more air movement.

Last winter I hiked 8km into Grassy hut for a three night backcountry ski trip, I carried my gear in my 2013 Ariel 65 and by the time the trip was over I had bruises on my hips and the inside of my shoulders were tender. Having a slimmer body type, this is something I had come to accept as part of backpacking, but this is not the case with the 2017 Ariel AG 65. In all my trips thus far (the longest being over four days) I have yet to have any bruising or hot spots. I put this down to the additional padding and enhanced cushioning provided by the Isoform5 design and construction.

The upgrade in fabrics on the new Aether and Ariel AG packs has removed any anxiety I used to have about tearing up the front mesh pocket on the 2013 version. That said, time will tell how durable the mesh on the carry system will be, the fabric seems durable and it’s not exposed like the front mesh pocket was but I will still be taking extra care with it.

The addition of the removable Top Lid and Day Lid Daypack had me dancing when I discovered it, this is a feature I had dreamed of for years and it’s integration and stand alone functionality is superbly designed given it’s a completely new feature. I have used the daypack on almost every trip to date and it’s comfortable, well featured and oh so practical.

Other reviewers have commented on the clamshell feel of the hip belt which is only an issue when putting a heavy pack on. Since I am not on the 'hippy' side, I personally don’t have a problem with it and found the support provided by the hip belt wrapping more firmly far outweighed the momentary adjustment required to open the hip belt up and slide in.

Overall the 2017 Ariel and Aether AG series is a remarkable improvement over it’s predecessors and well worth the upgrade particularly if, like me, you like to move more efficiently and take it a little easier on your body so that you can focus on getting out to enjoy being out in the mountains.