Backcountry Skiing is one expensive sport. Just to acquire the basic gear to participate you’ll need to spend at least $2500, if you’re looking at buying new. There’s the avi gear (transceiver, probe and shovel), the AT boots, AT bindings, poles, and of course, the light-weight skis; The light-weight skis typically being the most expensive on the list. Surface has addressed this predicament by producing a backcountry specific ski for under three hundred dollars (US). The skis are part of a new line they have developed called ‘Blanks’, which is a bare bones, stripped down, no frills line of skis for those who want to save a little coin. The Surface Analog Blanks are their alpine touring ski in this ‘easy-on-the-wallet’ line-up, and also the ski that we’ll review here today. 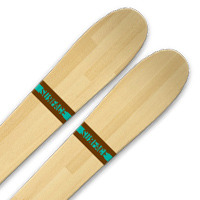 The Surface Analog Blanks have a directional taper shape. 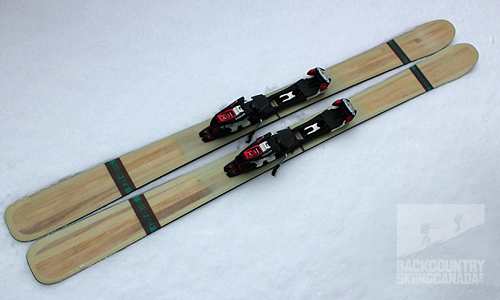 The Surface Analog Blanks feature an ultralight poplar wood core, kevlar runners from tip to tail, a sintered die-cut base, and 2.5 mm full wrap steel edges. Surface calls these their “non-sense, directional, ski touring and ski mountaineering work-horse”. They’re 100mm at the waist, which allows for taming the pow and having plenty of camber underfoot; They sport early rise rocker construction and a directional taper shape. The Analogs have a short turn radius, so they’re versatile in the trees and also perform well on steeps and more technical terrain. Weighing in at just under four kilos, the Analog Blanks aren’t the lightest ski out there, but they don’t slow you down any on the skin track.

Early rise construction along with underfoot camber allows for deep snow and hard pack skiing alike. The camber is significantly decreased on the tails to facilitate ski mountaineering and kick turns, while still allowing for an easy reverse mode on the skin track. 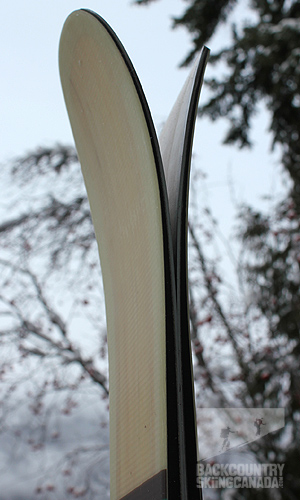 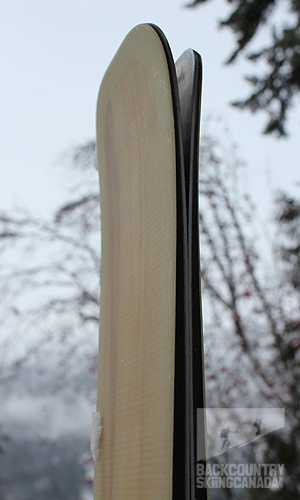 The Analog Blanks 140/100/126 dimensions are fat enough for backcountry pow, but not too fat that you don’t smile on a groomer. 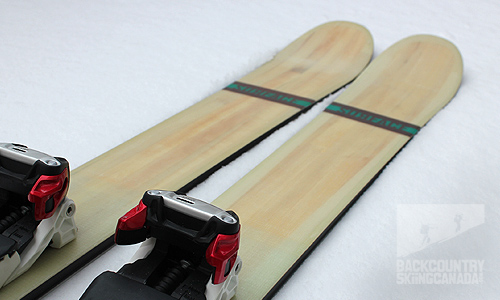 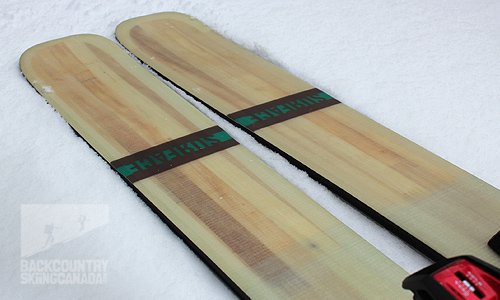 Plenty of camber underfoot allows for quick, short radius turns when you need them. 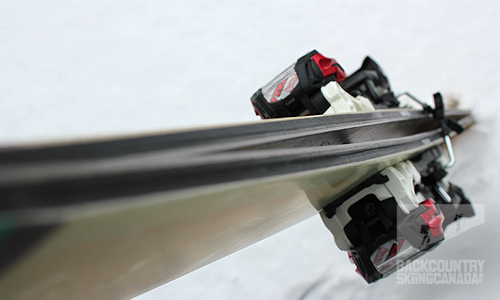 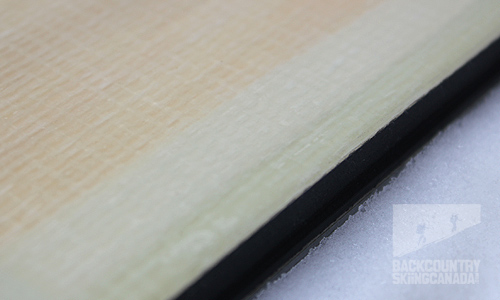 At $299 the Surface Analog Blanks are a bargain any way you look at it; even with the 30% exchange rate we Canadians currently have to pay. If you are looking for a relatively light-weight touring ski you won’t find one any cheaper. My preferred touring ski is the Volkl V-Werks BMT 109; (No surprise there, as it won our coveted Gear of the Year Award). The BMT ski, however, retails for $1200 Canadian. This is almost four times as much as the Surface Analog Blanks. So, are the Vwerks BMT 109’s really four times as good? The short answer is, for an expert skier, yes. But if you are just getting into the backcountry skiing game, the Analog Blanks are not only great value for your money, but also a ski that is ideally suited to your ability. The Surface Analog Blanks aren’t likely to win any awards for how incredible they ski, but for the money, they can’t be beat.

So how do the Surface Analog Blanks ski? To find out I spent several days chasing pow all around Whitewater Ski Resort, along with a few days beyond the ropes in their extensive backcountry terrain. I encountered some of the best virgin powder of the season, as well as more than my fair share of completely skied up soft snow. In-bounds, the Surface Analog Blank Skis were put to the test taming hardpack, groomers, chunder, and a challenging blend of variable snow. Overall, I found the Analog Blanks performed reasonably well. Again, we have to remember that a Ford Focus is not expected to keep up with a Porche 911. In variable conditions the Analog Blanks could use more weight to power through the snow, and on deeper days I was finding myself wishing for more girth underfoot than the 100mms provided. An increase in girth, however, would hinder their uphill climbing abilities. While the early rise tips did provide some float, I found them conservatively shaped, and again I was left wishing for more. The camber underfoot was generous and made the ski playful with fast edge to edge transitions when I needed them. While this exuberant ’pop’ in the turns was great for tree skiing, the shape of the skis’ tips made them difficult to track on hard groomers, and the ski did not instill confidence when performing flat out GS turns. In choppy powder snow I found that I was getting thrown around a bit, and felt I really needed to stay over the tips as I drove the skis; otherwise I’d end up in the back seat.

On the whole, the Surface Analog Blanks are what they’re meant to be: a good entry level ski for a very reasonable price. Just don’t expect too much of them and you’ll be laughing all the way to the bank.