We like Patagonia not just because they make great gear—we like them as a company because they put their money where their mouth is and do good work to protect the remaining wilderness we all love to play in. A relatively new program from Patagonia is called The New Localism and it’s focussed on protecting magical places. One of the areas that the company most recently threw its weight behind is the Jumbo Valley, here in BC’s interior. It’s still a little unclear whether the battle is over to keep “Jumbo Wild” but Patagonia continues to be in the game and it was remarkable to see how they mobilized to get the word out and educate people on the issues. For more on the New Localism, go here. 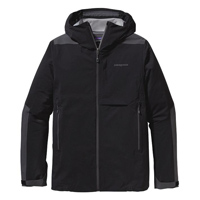 Another program from Patagonia is called Worn Wear. The whole idea is to appreciate old gear and apparel and, rather than chuck it in the landfill if it blows out, get it fixed. This is going against the tide of gear greed with which even we, here at Backcountry Skiing Canada, do battle.

Right about the time that the Patagonia/Sweetgrass Productions Jumbo Wild movie came out (yes, there was a movie) the company released a new line of backcountry specific apparel. Though people have been touring in Patagonia kit forever, this may have been the first introduction of an actual, designated line of apparel.
The Refugitive Jacket is in this backcountry line and I was compelled by three features: stretchy, 3-Layer GORE-TEX® fabric, and GORE® C-KNIT™ backer technology. Read on to see how the jacket worked out.

Handy inside pocket for mobile phone, wallet or other chachkas. 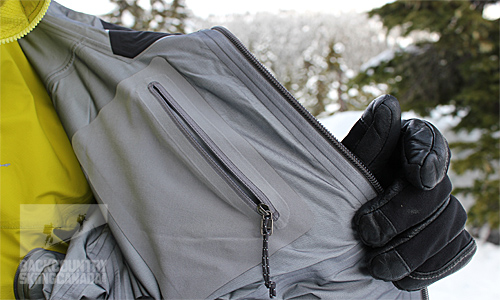 Wanna buy a gold watch? Big mesh pocket on one side for skins or gloves. I’d personally like to see one of these pockets on both sides. Nice, full-length watertight pit zips, lookers’ left. 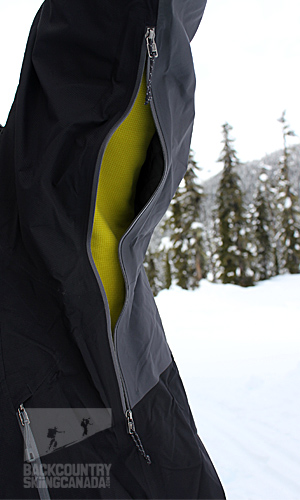 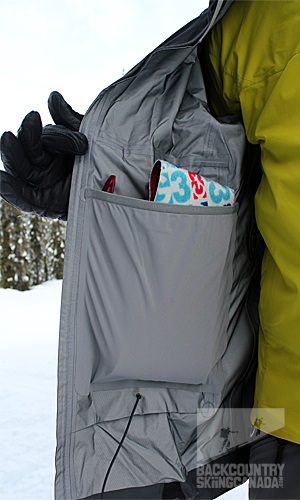 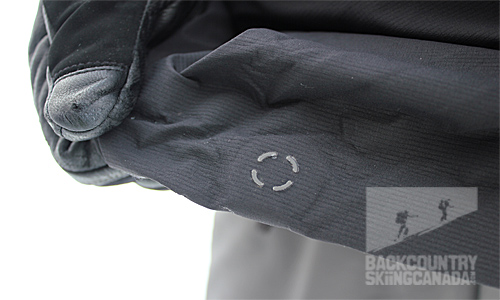 Half the story of the jacket is in the fabric—all GORE-TEX®. The grey portions along the back and arms have a little stretch, the black front and back does not. Welded seams. 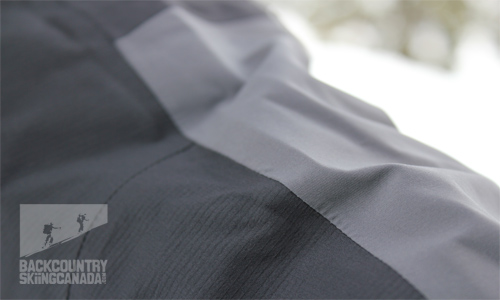 “Snacky” hood with single pull draw cord. Compatible with or without a helmet—pictured here without. 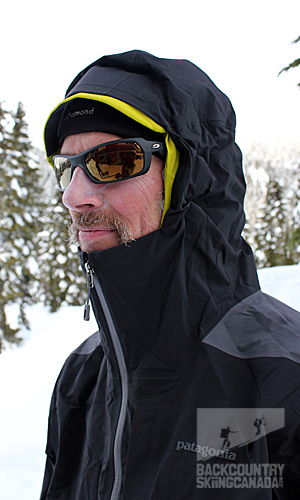 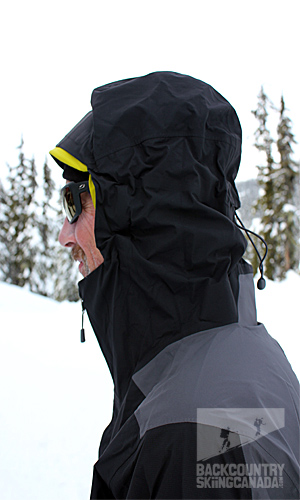 Here’s the overall shot up at Journeyman Lodge in Callaghan Country. A word on fit ~ I am 6’2’ and about 175 lbs. This is a large. I might get a medium next time around. Is everyone else getting bigger or am I getting smaller? 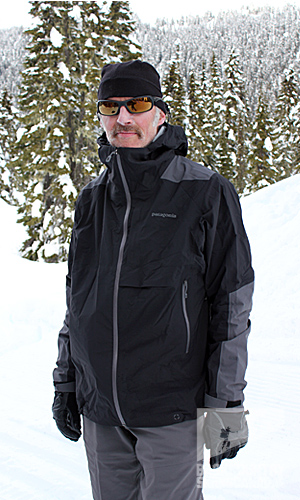 I have had the Patagonia Refugitive jacket for most of this season and have been out touring with it many times. I also use it as an occasional lift service jacket when I want to layer up on a cold day or when conditions are wet and I want to stay as dry as possible. The Refugitive has done very well in both situations. The promise of the new C-knit backer fabric may be a stretch with its next-to-skin comfort claim. I would say it’s more of a “not uncomfortable” next to skin situation—I wouldn’t want to wear a short sleeved shirt under this, unless I had to.

The “hand” of the jacket is light and smooth. No chip bag sound effects luckily. The jacket packs down very small into your ski bag, making it a good shell to bring along for any kind of protection when space and weight are at a premium. Like…when aren’t they?

I run fairly hot on the uptrack so rarely do I wear a shell. On the occasions that I have worn the Refugitive on a slog, it has breathed well and I haven’t overheated. The stretch along the shoulders really contributes to the overall comfort of the jacket. Still holding up after one season; if it starts to show signs of wear, I’ll send it back to Patagonia and experience the Worn Wear program.