While working on an assignment for Outside Magazine in March 1996, Jon Krakauer found himself in Nepal writing about a guided assent of Mount Everest. Originally he was going only as high as base camp to write about the business of Everest, Sherpa’s and adventure consulting firms that brought “marginally qualified dreamers” as close as they could to the tallest peak in the world. Krakauer was inspired, however, as he rekindled a love for climbing and adventuring that pushed him to shoot for the peak. The book details the hard work and strategy that goes into acclimatizing your body, teammates and Sherpa’s whom Krakauer spent the last two months with and ultimately the blessings & curses that face climbers and adventurers everywhere. While he and most of the team succeeded in summiting the world’s tallest peak in May, many perished when a rogue storm trapped them high on the peak. 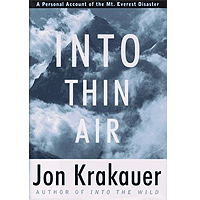 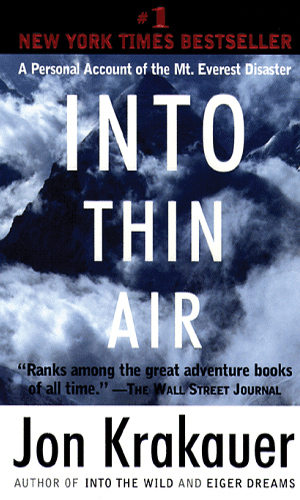 Much criticism has been generated as a result of this book from survivors, mountaineering experts and critics of literature. But the first hand account from Krakauer offers a reality that comes with high altitude decision making during a crisis with both mental and physical impairments. The story is a certain life-changing event for those involved and offers new perspective on mountaineering, adventuring and life threatening choices.

The tragedy that killed 8 people on Everest in May 1996 inspired a movie entitled Everest that was released in 2015. Fellow survivor Lou Kasischke also wrote a book entitled After the Wind, released 16 years after the fact. Anatoli Boukreev wrote The Climb from his perspective, as did Beck Weathers in his 2000 book Left for Dead.

I would recommend this book to any climbing or adventuring enthusiast, or anyone interested in climbing Mount Everest.