Dometic is a company that creates products for mobile living. While their products may not be designed to fit in your backpack, they are ideal for RV users, boat owners, and car campers. Dometic designs award-winning products for cooking, keeping food fresh, personal hygiene, maintaining comfortable temperatures, and more. Their CFX3 series is comprised of powered coolers, varying in size and features to meet you and your mobile refrigeration needs. We decided to review the Dometic CFX3 45 given its capacity and overall size, however, this is not your average cooler. This mobile cooling unit is basically a minifridge for your vehicle. Compatible with 12/24V DC vehicle plug-in and 100-240V AC standard wall plug-in, the CFX3 series coolers will keep your food and drinks reliably cold without the need for cold packs of ice. 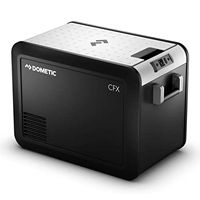 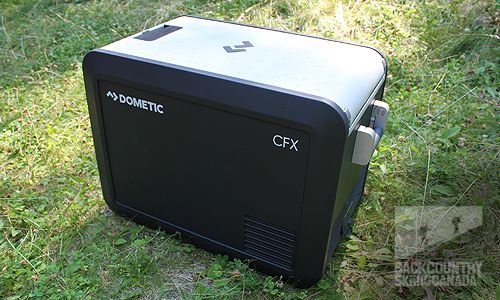 The Dometic CFX3 45 offers 46 litres of capacity and fits 67 beverage cans if you’re feeling thirsty. CFX3 coolers are also offered in 25, 35, 55, 75, 95, and 100 litre capacities. A few of these sizes offer additional features such as an ice makers or dual compartments and temperature zones. 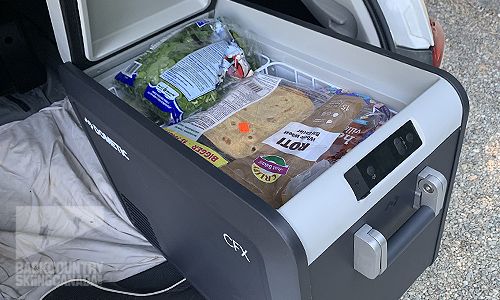 Removable wire baskets provide opportunities for organization within the cooler. 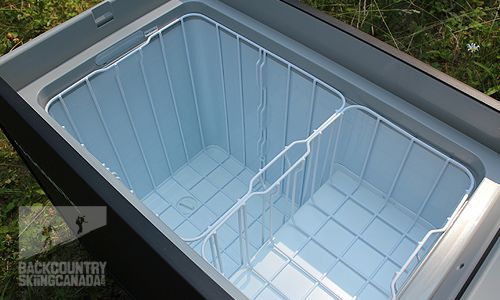 A drain and plug offer convenient means of cleaning the cooler. 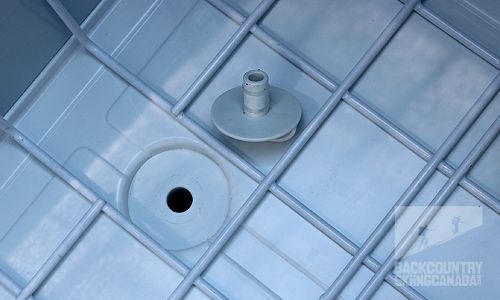 The high-resolution color display is weatherproof and features soft-touch buttons to facilitate temperature control and monitoring of cooler performance. 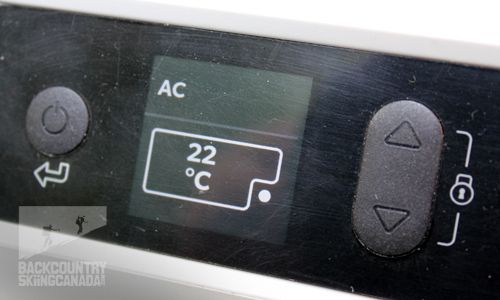 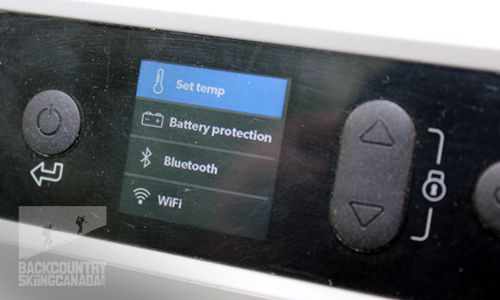 A USB port offers a spot to charge mobile devices such as phones, cameras, and speakers, so long as they are compatible with 5V/2A charging. 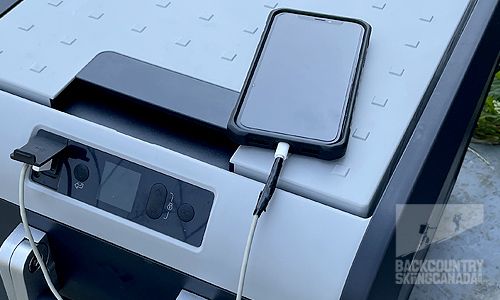 Your vehicle's battery is protected by the 3-stage dynamic battery protection system. This system prevents draining your car's battery and allows for deep electrical draws from dual battery set-ups.

The Dometic CFX3 45 Powered Cooler provides efficient refrigeration and deep-freezing up to -21.7ºC (-7ºF) which is handled by the powerful VMSO3 compressor cooling technology. Retention of cool air is enhanced with the Active Gasket Technology which offers a superior seal in order to minimize power consumption.

The mobile app is able to control the temperature of the CFX3 45 Powered Cooler via Wifi or a Bluetooth connection. The app also offers the performance history of the cooler. 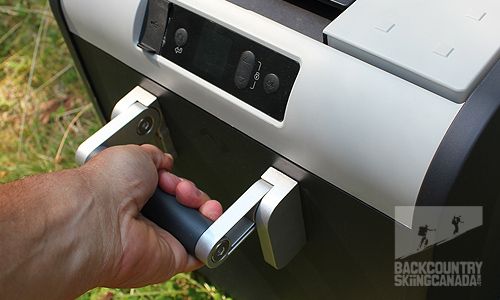 The CFX3 powered cooler comes with cables for both 12/24V connections and 120V connections so you can both plug it into a normal wall socket to power it when not driving and also into a standard cigarette socket in any vehicle so it stays frigid cold on road trips. You can also pair the CFX3 with a standalone battery should your road trip have prolonged breaks in it when your car will not be able to power the cooler. Dometic luckily has you covered here and makes the PLB40 which is a stand-alone battery that can charge the CFX3 for over 40 hours on a single charge and also works with anything else that may need some juice on the road or around the house. 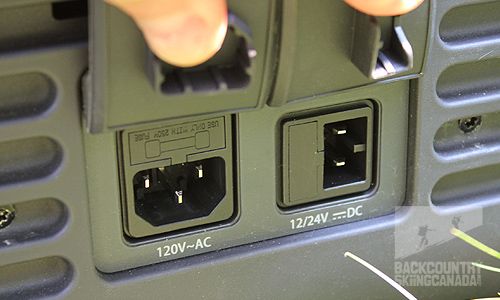 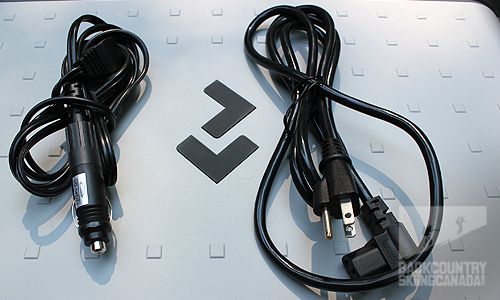 Tired of spending money on ice packs only to find them thawed and melted at the bottom of your traditional cooler leaving your food warm and soggy? Well, ditch the old cooler idea and get on board with the Dometic CFX3! The price is somewhat prohibitive but if you spend a lot of time car camping, or perhaps van living, getting a minifridge for your vehicle just might be the right move. Speaking of price, when considering that a Yeti cooler costs upwards of $500, the extra $500 may not seem so out of this world when it comes to the convenience and reliability offered by the DFX3 (not to mention all the money you'll save buying ice along the way).

I think the addition of vehicle battery protection is a particularly well thought out feature. It would be a terrible shame if you became stranded due to a dead battery because your cooler drained all the juice.

While on the subject of juice, say goodbye to gross cooler juice from melty ice bags! No need to buy ice every day on those summer road trips, the VMSO3 compressor keeps things cool and is obviously the biggest advantage to this cooler. It looks like the compressor takes up a lot of internal space but when you consider how much Ice you’d have to pack it with, it really doesn’t in comparison. Also, the cost savings from not buying ice really adds up over time. The compressor unit is virtually silent and takes no time to get things cold.

The ability to freeze items is a nice option but the convenience factor of the powered cooler needs no explanation. The catch is that this only works when the cooler is connected to power; turn the car off and there is no cooling, just an insulated box. Depending on the nature of your trip, this may lead to the requirement of ice and/or cold packs despite the onboard compressor, unless of course, you choose to run the vehicle just for the cooler… perhaps not the most environmentally friendly way to keep food and drink cold.

To keep things colder longer be sure to turn on the cooler in advance and also stuff it full. Air does not hold cold temperatures as well as liquid, so if there is empty space, fill it with a container of water and this will help keep the inside colder longer. This will allow the cooler to not have to work as hard when turned on, and keep cold temperatures longer when there is no power.

I like the idea of the mobile app. It’s a fairly simple add-on that just makes life a little easier, not to mention the ability to monitor the performance of the cooler offers some peace of mind. While the idea is a nice one, it would be better if it was more functional in practice, as we were not able to sync the app to the cooler that easily.

I think it would be ideal to have a very small battery (AA or a small Lithium-Ion battery) in the cooler so that you can look at the screen to see the temperature even when it is not plugged in. On a recent two-week trip during a heat spell when temps got up to 40°C + the car was often off for an entire day at a time so there was no power to the cooler and I need to turn the car on in order to see the cooler temp. Overall the cooler performed well and we only had to plug it into a wall outlet a few times to cool things down again since we were not driving every day. While I did find that the Dometic CFX3 45 Powered Cooler was not as well insulated as say a YETI cooler and things tended to get warm faster than I would have liked, it was nice to be able to check the inside temperature of the cooler to know when it needed to be powered up.

On the whole, the DFX3 45 is a pretty great addition to road-tripping and car camping. The Dometic CFX3 45 Powered Cooler is a quality product that helps to keep perishable food from spoiling while on the road.