Black Diamond’s new Helio line of skis replace the carbon Aspect, Convert, and Megawatt skis. The Helios are akin to Black Diamond’s Link series of skis, except they are categorized as a mountaineering ski (instead of backcountry), and have a softer flex. The Helio skis’ underfoot width comes in 88, 95, 105 and 116. They’re now being made by Blizzard in Austria as Black Diamond has closed their Asian factory. Being a carbon constructed ski with a balsa flax core, the Helio 105’s are an ultra-light, yet fat, so they're an ideal powder ski that can also take on some tougher conditions should the challenge arise.  Early rise in the tip and tail provides the needed flotation while skiing and also increases trail-breaking efficiency. 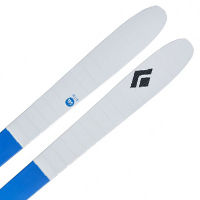 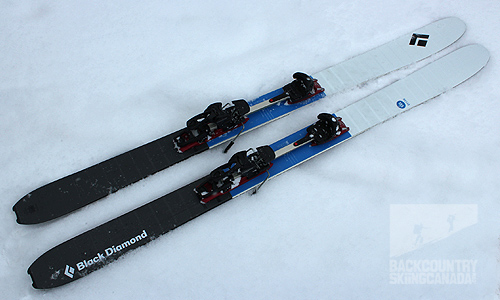 The Helio 105’s weigh under 3 kilos and are 105mm underfoot (obviously), so you get a whole lotta ski for very little weight. This is the main reason the 105’s are my first choice for review; the 88 and 95mm would be too narrow for a true backcountry slayer, and the 116 would be too much to handle for the odd lap inbounds. As with any lightweight ski, you give up some edge-hold and stability on firm snow to be rewarded with super easy climbing on the skin track. You’ll notice the Helio 105’s light weight when skiing crusty, challenging terrain, but where it really thrives is in floaty, carvable, soft powdery conditions. The substantial early rise makes even the deepest pow days effortless as the tips always float you to the top. While there is some tip chatter evident on boilerplate snow, the Sidewall Damping System in conjunction with the traditional camber underfoot helps maintain an edge and accommodate in as well as out of bounds skiing. 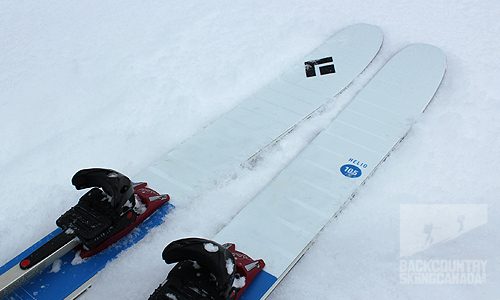 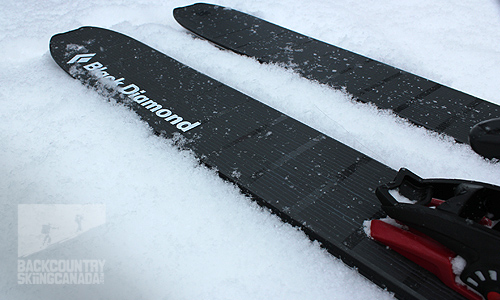 Like Black Diamond’s other carbon skis, the Helio 105 uses a balsa wood core and pre-preg carbon fibreglass. The reinforced ABS sidewalls help reduce chatter when skiing hard pack snow, but still manage to keep the ski light. The Helio line of skis use a traditional rocker/camber/rocker design, but have substantially more rocker in the tip of the ski than at the tail. The camber underfoot is just enough to help the ski carve on groomers and give them some ‘pop’. Black Diamond also did away with the metal tail clip found on their other skis, and went instead with an ABS tail protector notch to secure skins (likely to save weight). 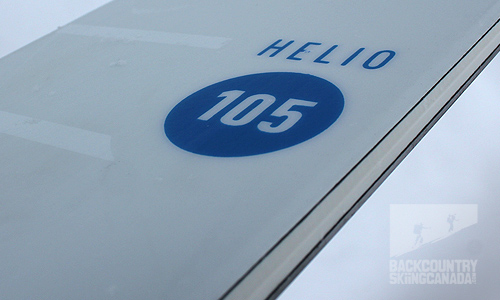 A little bit of camber under foot. 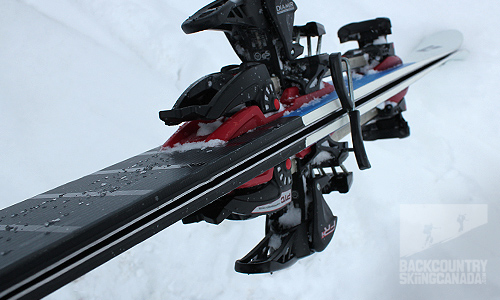 Aggressive early rise in the tips with much less in the tails. 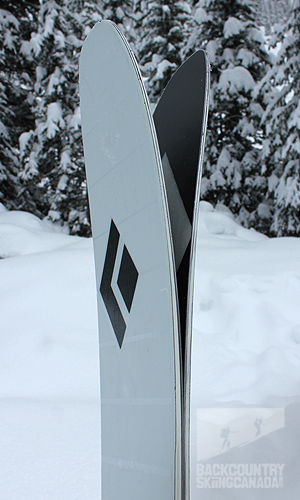 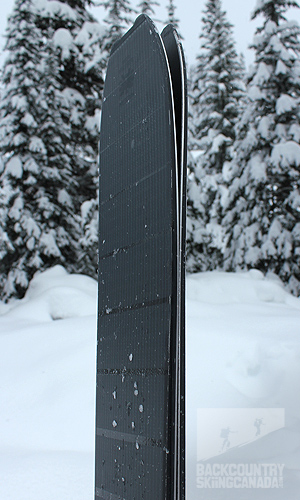 Most skis that tip the scales at under 3kg are going to require you stay on top of them to maintain control in variable conditions, as they simply don’t have the mass to plow through chunder and hard pack. The Black Diamond Helio 105 Skis do a better job at maintaining their composure than most skis in their weight class. But when push comes to shove and things really get ugly in the snow pack, you’ll know it. The Helio 105 is not meant to be an all-round, ski everything kind-o-ski. It’s a ski bred for the backcountry and not the resort. Beyond the ropes, you’ll typically find light, fluffy bottomless pow, and that’s just what the Helio 105 likes to eat for breakfast, lunch and dinner.

The early rise tip on the Helio 105’s is very pronounced, so you’ll experience some tip chatter on hard packed groomers. But again, this is not their natural habitat. At 105 underfoot, transitioning them from edge to edge can be a bit slow. And while they don’t possess the pop and fun of a resort ski, they do float and surf like nothing else when skiing deep snow. I’ve spent well over 20 days on the Black Diamond Helio 105 Skis in the backcountry and lapping the resort; While they can carve just fine on groomers, you’ll find they really don’t rail a turn, as they aren’t designed to. This is a distinctly light, dedicated ski touring ski with subtle camber and fat dimensions. For 3kg, these puppies are surprisingly stable in soft snow, due in part to their girth underfoot. However, in breakable crust and chop they tend to deflect easily due to this lightness. The pre-preg carbon fibreglass and reinforced ABS sidewall construction is surprisingly damp for such a lightweight ski, and overall, they are a pure joy to play with in the backcountry. They could be snappier on hardpack, but this would take away from their Cadillac feel in the deep stuff.

If you’re looking for a deep powder ski that can ski the resort perhaps 25% of the time, then these are your sticks. Any more than that, and I’d say go for something heavier like the Black Diamond Link 105’s, as this would be considered more of an all-rounder. If you want go light and fat for long touring days and you like to slarve it up, then consider the Helio 105’s as they’re guaranteed to put a smile on your face.