Many Canadians think backcountry skiing is limited to the western provinces when, in fact, there are a number of gems in the east and, in particular, the Maritimes. Newfoundland’s Gros Morne National Park is an excellent example of a dramatic, alpine environment which borders the Atlantic Ocean and provides some excellent options for backcountry skiing. Gros Morne is a member of the Long Range Mountains, an outlying range of the Appalachian Mountains, stretching the length of the island's west coast. It is the eroded remnants of a mountain range formed 1.2 billion years ago. The “flat top” characteristic is similar in appearance to the massive plateaus of Québec’s Chic Choc Mountains on the Gaspé Peninsula (we are hoping to have routes for there soon also).

This is remote terrain so be prepared for the worst—the weather can be severe and changes quickly.

We want to hear about your adventures in Eastern Canada so don’t forget to post a trip report in the backcountryskiingcanada.com forums. If you have new route in the area you want to share, mouse-on over here. N-Joy.

This route was provided by Martin Hanzalek. If we have missed anything please let us know?

This is the central route that links most of the routes that exist in the Tablelands, in Newfoundland's Gros Morne National Park. The park operates a ski chalet at the top of the gulch, and many skiers in the area use the cabin as a base from which to explore the surrounding landscapes. The gulch itself is a narrow valley between the Tableland and the hills surrounding the southern arm of Bonne Bay. The valley forms a natural wind tunnel and 100+km/hr winds are not that uncommon in the gulch during winter.

The landscape here is bleak but beautiful and the stillness and tranquility of the Tablelands make this a great place to really get away from it all. There are two trails which will take you to the chalet and your choice should be based upon current weather and snow conditions, as well as the ability of the people with you. The area has its own micro climate and conditions can often be much different in the highlands than they are at the trailheads below.

The trail straight through Southwest Gulch itself is very open and exposed and there may be a maze of rocks to traverse around if there is not a deep snow cover. The wind tunnel formation of the valley means that travel through it usually involves facing a small gale at the least, even if it is windless above and below the gulch. On clear days with no wind, however, this is the most scenic route, traveling directly beneath the Tablelands and below Trout River Bowl and Winterhouse Brook Canyon. This route is approximately 8.5km one way and can be traversed fairly easy in 3-4 hours if conditions are good. The elevation rise is approximately 200 meters, but it is a gradual rise that is easily traversed with skins. There can be major safety concerns with this particular route, especially in late spring. Do not travel too close to the mountain slopes, especially where there is evidence of previous avalanches. This area is famous for slides, but by staying away from the lower slopes you will be safe. Another thing to keep in mind is the two small rivers in the area. Winterhouse Brook must be crossed and deep snow bridges may become rotten and unsafe later in the spring. Shoal Brook at the upper end of the gulch does not require crossing, and by keeping between the brook and the Tablelands you can easily find a safe route to the cabin. The other route to the chalet is a snowmobile trail that begins at the community of Birchy Head, in Bonne Bay South. This trail is mainly forested and sheltered from the wind but it is much steeper and can be quite icy after rain or a mild spell. It is also frequently used by snowmobilers so take caution and move to the right side of the trail as soon as you hear one approaching—and keep your mp3 player in your pack. This trail is shorter at 5km but it rises well over 300 meters, making for a tougher ski. On a good day, expect a 3-4 hour trek depending on conditions and group size. It is not as scenic as the Southwest Gulch route but it does offer some great views of Bonne Bay and Pic a Tenerife. This is also a much better route for viewing wildlife. Moose are a common sight, roaming in the young hardwood stands that run all along the park boundary that lines most of the trail. Skins are a must if you decide to take this route into the chalet, and be cautious when skiing out this way. The trail is narrow, making it impossible to check your speed, even with a snowplow. You may have to drop to your butt to stop several times where the trail had been worn down to mud below.

Whichever route you choose, you will eventually (hopefully) reach the backcountry chalet which lies just over 5km from the southern reaches of the park boundary. It is located in a small stand of trees that serves as the boundary between the rolling hills of the Bonne Bay Valley and sheer walls of the Tablelands, which rise up another 350 meters to the northwest. The cabin sleeps ten and is well stocked with wood and propane for heat and cooking. You can even arrange with park officials to have your bigger packs delivered by snowmobile. A small pond nearby can be used for water but prepare for a couple of hours of work with the auger. On my most recent trip, the ice was almost three feet deep and that was after a long mild spell. The cabin is in a perfect location and makes a great base camp for any number of day hikes either on the Tablelands or the foothills around the cabin.

You can spend plenty of time running the lower slopes of the Tablelands, and the surrounding hills feature a wide open forest made up of a mixture of Birch, Larch, and Black Spruce that is ideal for snow shoeing. The area is very quiet and serene and everywhere you turn there is another great view that just can't be recreated in a photograph.

Southwest Gulch is an amazing place and it may even be the best backcountry ski destination in Newfoundland. The sheer unmatched beauty of the place overshadows its world-renowned geology and intriguing ecology, and will be sure to keep you coming back again-and-again to explore the mysterious alien landscape. It is however a remote location and should not be attempted unless you have the necessary skills to do it safely. Avalanches are common here so educate yourself on the warning signs and always carry probes, shovels, and beacons and know how to use them. Remember to step lightly when traveling through this delicate ecosystem so that it can be enjoyed by generations to come. 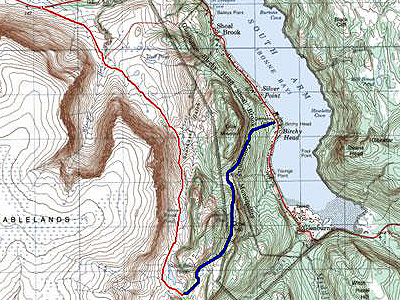 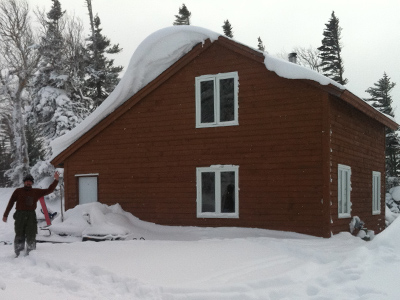 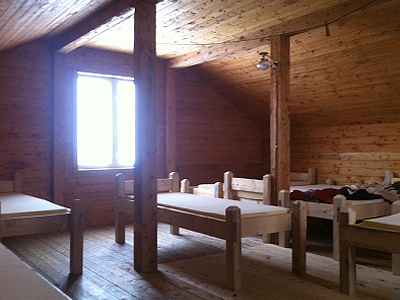 ROUTE: Tableland Mountains Traverse to Southwest Gulch Alpine Cabin
ACCESS: This trail starts in Gros Morne National Park, Newfoundland Canada.  From Deer Lake Airport drive north into Gros Morne National Park and then turn left towards Woody Point. In Woody Point, take the turn towards Trout River and park in front of the Gros Morne National Park Interpretive Centre. You will see the Tableland Mountains across from the centre. The obvious bowl you see is Trout River Bowl and to the left of it is one called Winterhouse. To the left of that is the Southwest Gulch. Access to the alpine cabin can be gained by skiing up Trout River Bowl, then straight over the Tableland Mountain Plateau, and then down to the alpine cabin (approx 8 km) or by skirting the mountains and going up the southwest gulch and into the cabin through a more moderate route. Please note that both routes are exposed to avalanche terrain and require safe travel practices.
MAP: 39104d5
TIME: 4 hours
ELEVATION GAIN: 487m/1600’
ATES RATING: Challenging (2)