The Backcountry Skiing Canada crew completed the Wapta Traverse which is the classic Canadian ski traverse located in the heart of the Rockies just outside Lake Louise. There are four huts along the way to make the journey more enjoyable — the Peyto Hut, the Bow Hut, the Balfour Hut and the Scott Duncan Hut. Over the six days (we took it uber relaxed) we climbed Mt. Olive and Mt. Balfour as well as skied laps on the Crowfoot Icefield, the Diableret Glacier, Mt. Rhondda South, Mt. Gordon and Niles Creek.

For a full listing of backcountry huts, cabins and lodges (including all of the Wapta Traverse huts) check out the Rocky Mountain lodging page over here.

The route starts from the parking lot at the Bow summit on the west side of Highway 93. It descends through thick steep trees to  Peyto Lake. From here you have a good view (on clear days) of the long ski tour across Peyto Lake and then the gradual climb into the alpine. In good conditions, the Bow to Peyto approach can be an easy trip, but in poor visibility or whiteout conditions navigation can be extremely difficult. Once at the west end of Peyto Lake you may have to cross an inflow stream in order to continue up the valley ahead of you. After about .5km the valley begins to tighten and you have two choices, continue into the canyon or head slightly north and climb up the moraine to gain the height of the ridge to the north-west. The preferred route is to stay high on the moraine as the canyon is a serious terrain trap. Once on the moraine you will find a small basin before you have to boot back the final steeper section (caution is required here for avalanche danger). Continue heading west and you should see the Glaciology Research Hut as you begin to ski down to the Peyto Glacier. Ascend the Peyto Glacier in a southwest direction avoiding the steeper terrain and crevasses. Now head back easterly towards the Peyto Hut which is on a rocky outcropping below Mt. Thompson.

ACCESS: The trailhead is on the west side of Highway 93 and is located at the parking lot and tourist viewpoint at Peyto Lake. The turn-off for the parking lot is located five km north of the turn-off for the Num-Ti-Jah Lodge. Alternatively, there is a plowed parking area on the west side of Highway 93, down the hill and 2.5 km past the bow summit.

From Peyto Hut the route ascends southwest onto the Wapta Icefield with Mount Thompson on our left (east) and Rhondda South on your right (west). Maintain your elevation and don't get pulled to the west and start descending onto the Bow Glacier, this is not the way you want to go. With St. Nicholas in your view dead ahead you will eventually lose elevation and can ski down with towards the Bow hut with St. Nicholas on you right. Beware of crevasses and ensure you have white-out navigational skills as it is very easy to get lots if the weather closes in.

Alternatively, you can access the Bow Hut from Highway 93 North and the Num-Ti-Jah Lodge it is 8km to the Bow Hut with a vertical gain of  400m / 1310ft  which typically takes 3-5 hours. Begin by skiing across Bow Lake and along the stream bed at the other end. Follow this for approximately .5 km until the canyon becomes too tight to ski in. From here you will ascend into the trees on your left and parallel the canyon. Once in the open beware of avalanche paths that you must cross. You eventually end up back in the canyon on the creek bed for about 1km. Again you will head back up and into the trees on your left and gradually climb. When you exit the trees you will be in a large alpine area so caution is required. You can now see the Bow hut for the first time high up on a rocky bench on the right. Head across the open slopes (with caution) and eventually wrap up and to the right climbing the last steep section of about 100 meters to the cabin.

ACCESS: From Peyto Hut cross the Wapta Glacier or via the trailhead in the parking lot of Num-Ti-Jah Lodge on Highway 93 North 40 km north of Lake Louise.

ACCESS: From Bow hut, you have two options to access the Balfour Hut (also known as the Rob J. Ritchie Hut). If avalanche conditions permit you can ski tour up and under (the east side) of St. Nicholas Peak, however the traditional route is around the west side of St. Nicholas Peak.

The Scott Duncan Hut is located on a cliff bench below the northwest ridge of Mt. Daly at the south end of the Waputik Icefield. To access the Scott Duncan Hut from the Balfour Hut you need good weather and stable snow conditions as you must gain the Balfour High Col. This is often described as the crux of the Wapta traverse and with good reason as there is exposure to avalanches, ice fall and crevasses. Ensure that you have good weather for the day with unlimited visibility and start early to ensure you are over the pass before things start to warm with the mid day sun. Leaving the Balfour Hut you descend a small slope and then you have two options. The first and more common route is to ascend the Waputik Glacier by heading west around a cliff band and gaining a wide bench and heading directly towards the Balfour High Col with Mount Balfour on your right (be aware of potential ice fall here). The second and equally exposed option takes you under the cliff band and across the flats in a southerly direction where you then start ascending the lower slopes of Mount Balfour. Switch back up until you reach the Wapituk Glacier and head towards a prominent rock outcropping to the south. Directly right of this outcropping is a very thin ramp that will gain you the upper reaches of the route where things will mellow out a bit and take you away from icefall danger off of Mount Balfour. Ski tour across the High Col in a more Easterly direction for approximately 1km when you should be able to remove your skins and ski down the Wapituk Glacier heading for the northwest corner of Mt. Daly. Caution is again required here as there are several crevasse features in your direction of travel. In whiteout conditions it can be very difficult to navigate the Scott Duncan hut so be sure to be prepared with the proper gear and skills.

ACCESS: From the Balfour Hut via the Balfour High Col which is the most challenging and potentially dangerous section of the Wapta traverse.

The most common exit from the Scott Duncan Hut is via Sherbrooke Lake and the Scheisser/Lomas route which is an 11km ski tour to the West Louise Lodge which puts you 14km west of Lake Louise on Highway 1. You lose approximately  1,190m / 3,900ft and requires 5 - 6 hours to complete and in bad weather can be quite challenging so you need to be prepared. Leaving the Scott Duncan Hut you would ski around the cliff band immediately in front of the hut and then head in a southerly direction using Mt Daly as a handrail on your left and Mount Niles as your target. After a few kilometers you will come to a small peak go to the right of this and descend down to the westerly shoulder of Mount Niles. Continue due south on a very large bench that will provide a nice descent of almost 2 km that wraps around to your right (west). Be sure to ski far right until you know that you're above Sherbrooke Creek, if you don't go far enough west you may get cliffed out in the trees. Ski through the trees a short distance until you find Sherbrook Creek bed and then follow this out to Sherbrook Lake and cross it to the far end. Ascend the slope on your left and begin searching for the summer trail or remnants of ski tracks which will lead you east around the shoulder of Paget Peak to the West Louise Lodge on Highway 1 a few kilometers away.

ACCESS: The most common exit from the Scott Duncan Hut is via Sherbrooke Lake and the Scheisser/Lomas route. 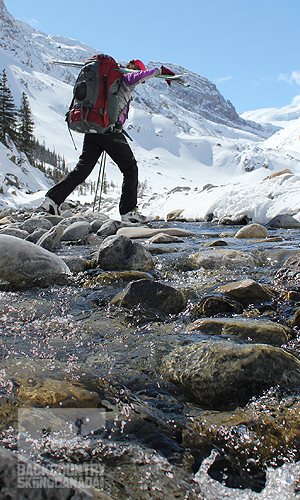 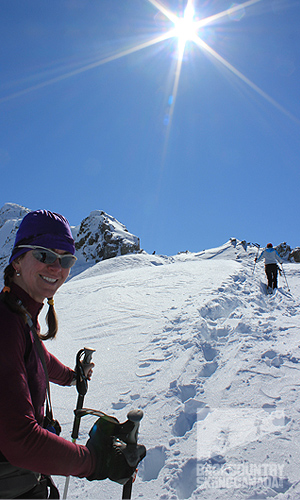 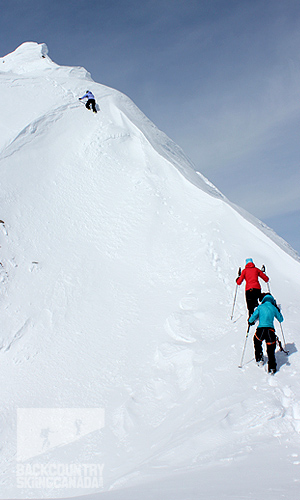 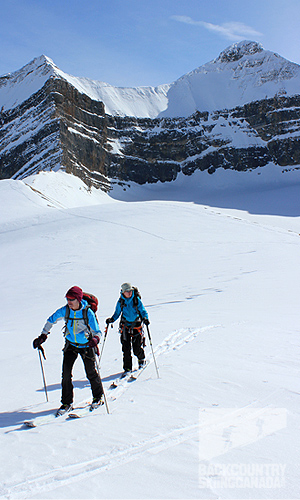 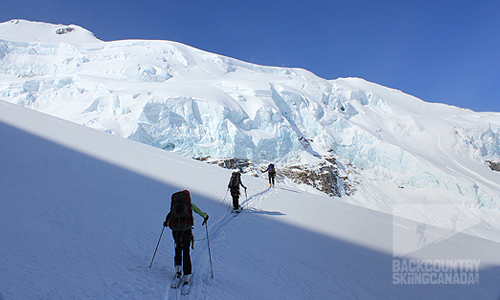 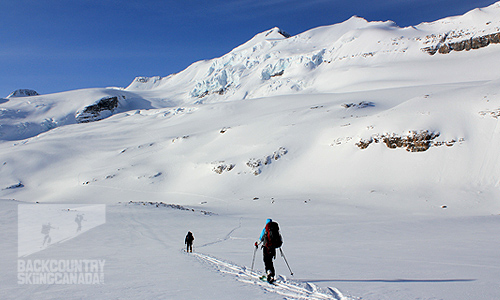 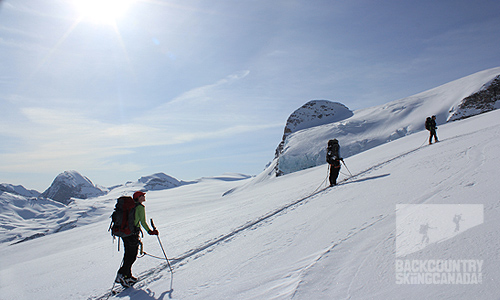 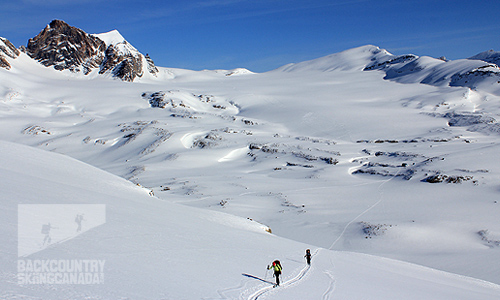 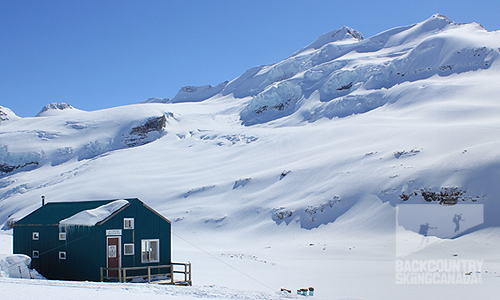 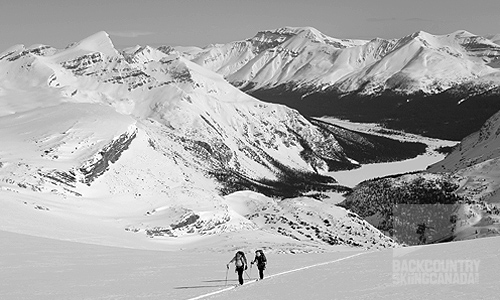 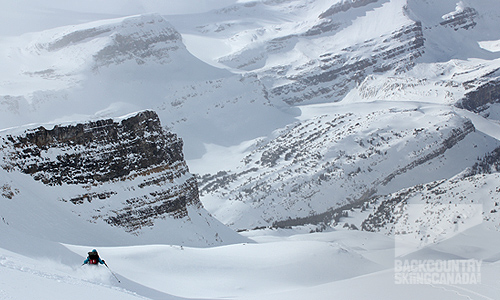 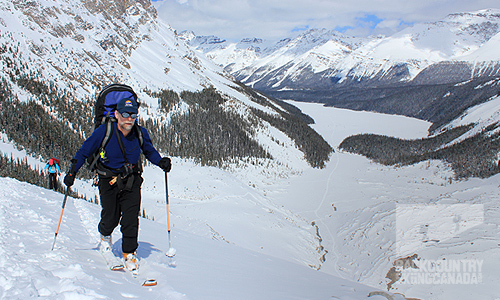 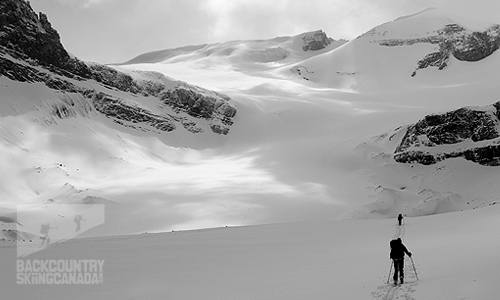 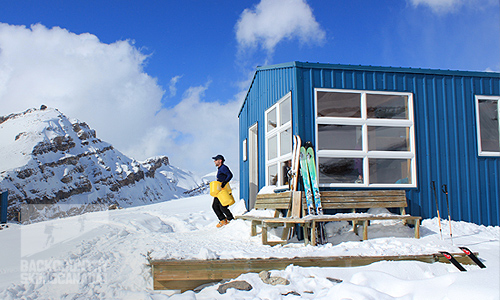 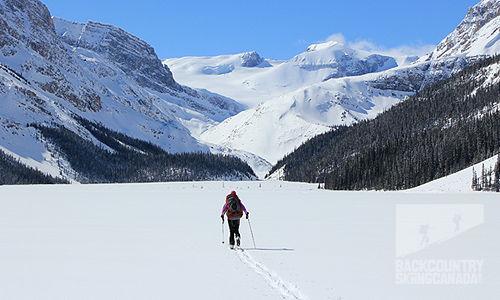